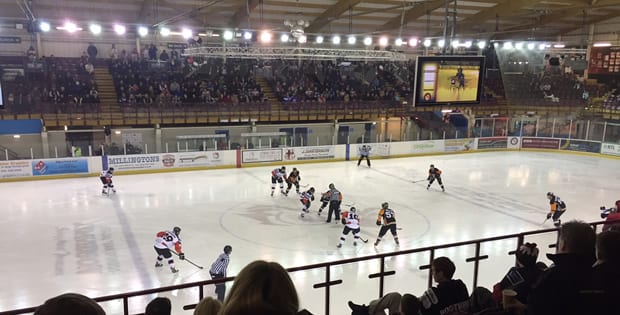 The Tigers have spent a lot of money in recruiting a team that had them 11 points clear at the top of the table prior to this game, and they had the lead within three minutes through Jason Silverthorn, thanks to a lovely tip on a shot from the blueline.

Phoenix dug in and equalised at the start of the second, but fell apart later in the period with the Tigers taking a 4-1 lead in to the second intermission, including a sweet strike from Jonathan Weaver, a man who I’ve seen at the highest level with Coventry and Newcastle.

Frantisek Bakrlik also nailed a sweet shot in the third off the pipes, although it was mere consolation for Manchester.

Telford brought a fair few fans for the festive fixture, and there was a lively atmosphere with plenty of chants going between the home and away supporters.

It was the first time I had seen Phoenix this season, and I felt they really lacked control in the D, and too often were caught out with the puck in their own zone.

Amazed to see the legend of British Ice Hockey, Tony Hand, still going strong at 47. Five years or so, talk was rife virtually all season every season that he was going to retire at the end of the current campaign, but such is his longevity that all talk of hanging up his skates has seemingly disappeared.