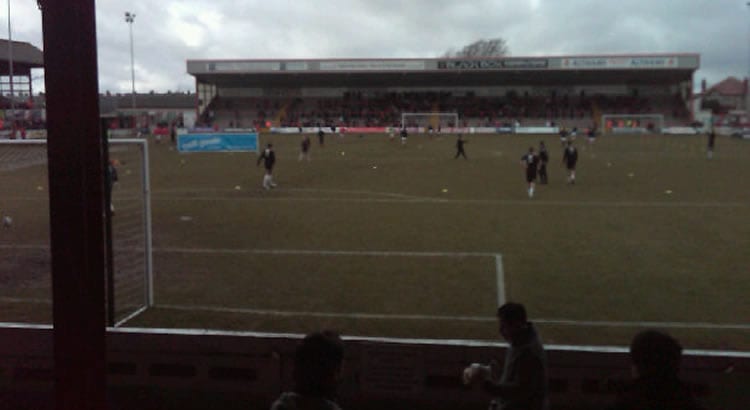 Generally, sports fans need to have a good sense of humour.

Even more so when you support a team at the lower reaches of the Football League. I experienced this first hand last Saturday, as I travelled to Christie Park to watch struggling Grimsby search for an important three points at Morecambe.

Despite being thoroughly outplayed in the first half, the Mariners fans behind the goal kept their spirits up at the expense of Morecambe goalkeeper Barry Roche, who played for more than half the match with a bizarre nose protector, having been caught by an elbow in a challenge near the end of the first half. There was that and a sequence of cheers for the young Morecambe fans chasing the ball down the sideline after it had been kicked out – tevery time they missed the ball, the Grimsby fans roared in humour. It’s the small things that keep us sports fans amused, a good job too.

It’s as if Town fans are resigned to relegation. To their credit, they battled back to a 1-1 draw at Morecambe to grab a point, but it was soon rendered pointless when news filtered through of Cheltenham’s incredible 6-5 victory over Burton.

My friend says this is the worst team he’s ever had the pleasure of watching. I’ve seen them seven times in the past 18 months, and two draws is all they’ve been able to muster. They can thank striker Adam Proudlock for his work in earning this point – the striker did a superb job of holding up the ball in the second half, and it made you wonder just why he wasn’t employed from the start.

A draw away at Morecambe, in what will be Grimsby’s last ever visit to Christie Park regardless of their league fate – Morecambe move to a new ground for next season – would usually be a half decent result, but sitting six points adrift and with games running out, there’s not long left for the Mariners to plot their great escape.