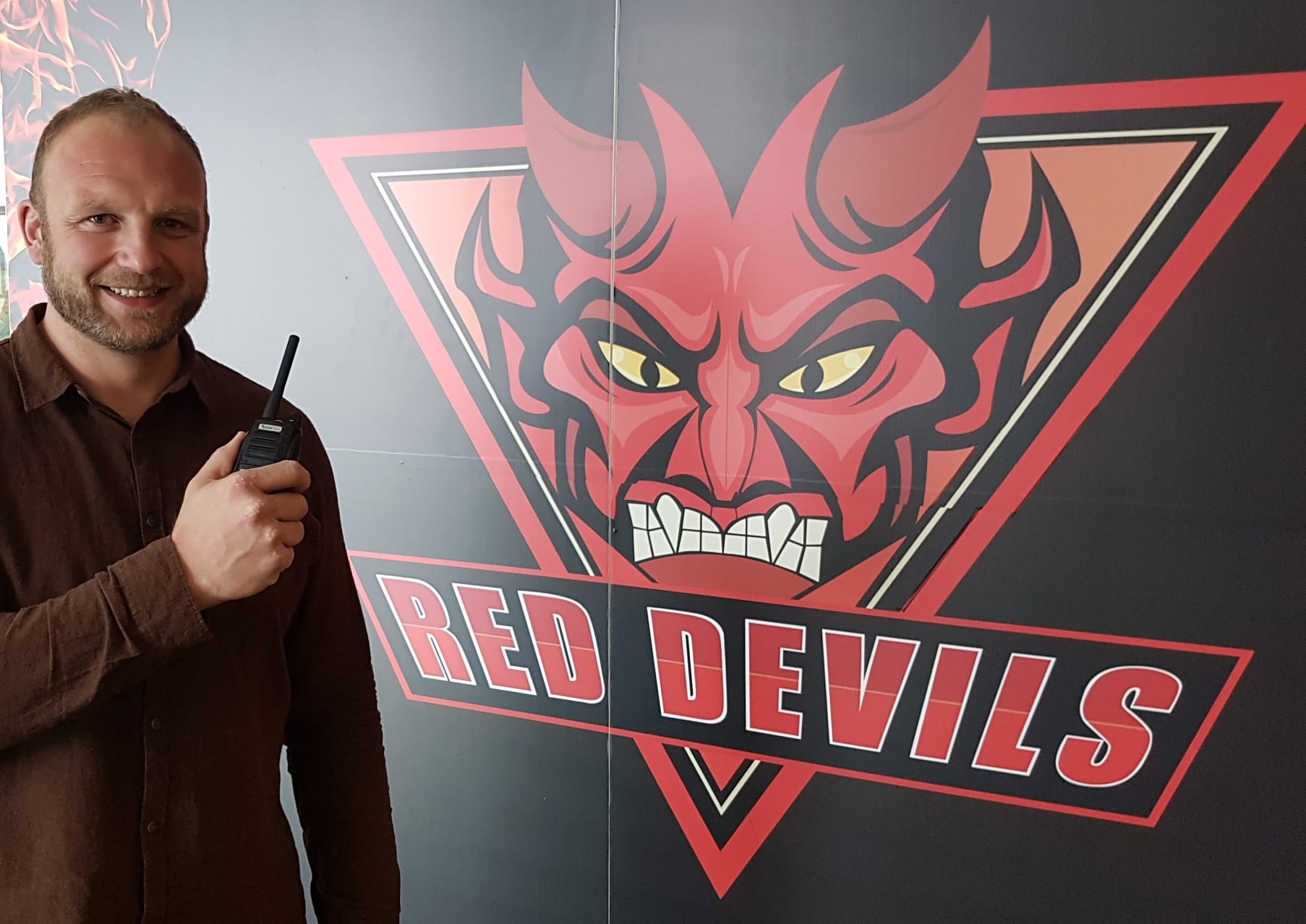 High-flying Salford Red Devils are ‘talking up’ success after hauling themselves back from the brink of disaster to enjoy one of their best ever Super League seasons.

But ever since they have been riding high towards the top of the table – defeating North West rivals such as Wigan and Warrington along the way in a memorable 2017 campaign.

It’s been a remarkable transformation that Player Welfare Manager Garreth Carvell puts down to the players developing a mental toughness to turn adversity into triumph.

The dramatic turnaround has also coincided with the introduction of new two-way radio equipment from Storno that provides vital communication between coach Ian Watson and his dugout team during the heat of battle.

“In a perverse way playing the Million Pound Game (a winner-takes-all contest against Hull KR) helped us,” said Carvell.

“The players got a bit of grit and mental toughness. Because they have been through it they know for a fact they don’t want to go through it again.

“The mental edge is there and that’s the biggest difference. This team is capable of reacting in a positive way to any adversity. It’s a tight knit group. They are all friends off the field as well as on it and look out for each other.

“The Million Pound Game was a watershed moment. Two minutes to go we were ten points adrift and dead and buried. As a club and players we were all in the frame of mind that we are going down so we knew what it felt like.

“We never want to experience that again. We came back alive through a minor miracle and know anything is possible now.”

The former Great Britain prop forward is also the club’s Commercial Manager and Team Manager in a wide ranging role that provides a valuable link between the players, coaching staff and wider club hierarchy.

He added: “It’s the one and two percent throughout all aspects of the club that gives us a cumulative advantage.

“Two way radios are a vital part of our matchday performance. The Stornos are very good and give Ian instant communication with the bench to make game changing decisions when he is sitting higher up in the stands. They deliver crystal clear communication even in noisy crowd environments.”

The brand has been brought back from the past by Salford-based distribution powerhouse Nimans and is available from supply specialists such as Pennine and Rocom.

“I’ve been here two-and-a-half years now,” said Carvell. “Everything is working a lot better because when I first joined it was a bit disjointed.

“But we are a much more tightly knit team now – all the pieces of the puzzle fit together and the club is moving forward in a much more cohesive way.

“From a welfare point of view a lot has come in for the doctors to do a lot more now and we have been able to supply them with separate radios to the coaching staff on a different frequency.

“That’s how it’s got to be according to the rules. The physio and the doctor wear earpieces so they can go out on the field especially if there is a head injury. It’s vital they work quickly and effectively together.

“Clear communication is crucial on and off the field. Ian and his assistant have Storno radios at the top of the stand and communicate to the touchline all throughout the games to make substitutions and change tactics and so on.

“They are an essential part of every match. Poor communication would cost us points. Storno are trusted and part of our match day routine. We don’t give them a second thought. They are our extra man.”