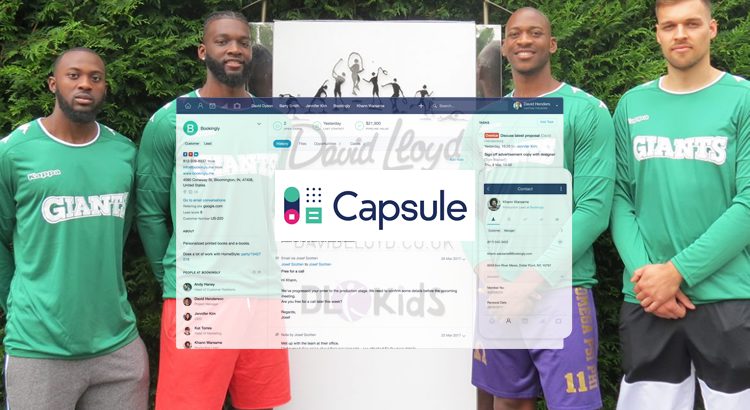 There are vast amounts of money in the world of sports sponsorship and an ever increasing number of brands, clubs and groups fighting for the same money.

Whether it’s businesses wanting to support their local team, boost their corporate social responsibility (CSR) ratings or because they can project a sound return on investment, there are a wide range of different types of people involved in sport.

For some, sport provides a break from the day-to-day life of work, and as such being able to entertain staff and clients, or even to network with potential suppliers and clients, are other attractions to those who invest great sums in to having a pitchside advertising board or their logo on the front of a replica shirt.

In this blog, I’m going to provide some insight in to the methods I use to manage and activate sponsorships.

The most successful sponsorships work over a long-term period – Carlsberg and Sharp are still heavily linked to Liverpool and Manchester United following years of sponsorship, despite the fact its a decade or more since they were last involved.

But to get to that stage, clubs need to ensure they do the right things in the short-term. Many clubs in my experience are happy to take the money up front, but then fail to deliver what’s promised, or even if they do, fail to do enough to convince a sponsor to renew.

This results in a high churn rate, increasing the workload for sales staff and of course adding uncertainty to the budget forecast.

Sometimes this is because the activation element of the sponsorship is lost between staff – the commercial sales manager is charged with selling new business, and thus doesn’t have the time (or sometimes the knowledge) to ensure that elements of the contract can be delivered.

Certain elements may be passed on to a social media manager or the website manager, but that only ticks some boxes, and the commercial staff may be reluctant to share the contact details as they are perceived to be “their” client.

To avoid this under-delivery, my method is to use a CRM – Capsule CRM to be exact – and I’ll try and show a few basic methods I use to try and be successful in sponsorship management.

As an example, here is a list of some basic partner benefits that are promised with any Manchester Giants sponsorship deal. 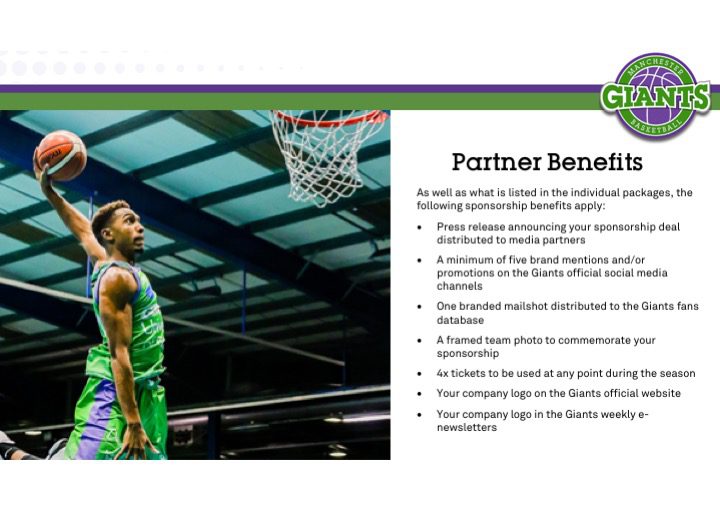 The above are all things that can be marked down as tasks, with rough dates stipulated and assigned potentially to another member of staff.

I should point out that sponsorship is only a small part of my job role, and as such this isn’t perhaps as thorough or as extensive as a full-time commercial team, however I do think it is scalable and could work for clubs at any level.

I have tried a number of CRMs over the years without ever really finding one that worked for me – apart from Capsule. The problem I previously had with Capsule is that the sales pipeline display was really uninspiring – however, they have recently changed to a view that Pipedrive users will be familiar with, which enables leads to be dragged along in milestones or dumped in to the won or lost bin.

A contact doesn’t touch my CRM until I have either spoken to them or met them. I may use LinkedIn or general research to build an Excel spreadsheet to list targets, but none of these speculative searches make it in to the CRM, meaning for more quality data.

Capsule has really improved how it displays its contacts, meaning you can add tags and then create filters to filter out by tags, or indeed by a number of criteria.

You can filter people who’ve not been contacted in the last X days, or people that don’t have certain data inputted (so you can find it out, for instance).

For me, the simple view of being able to see the name, email address and telephone number works (below is the Capsule’s own screenshot, GDPR!). 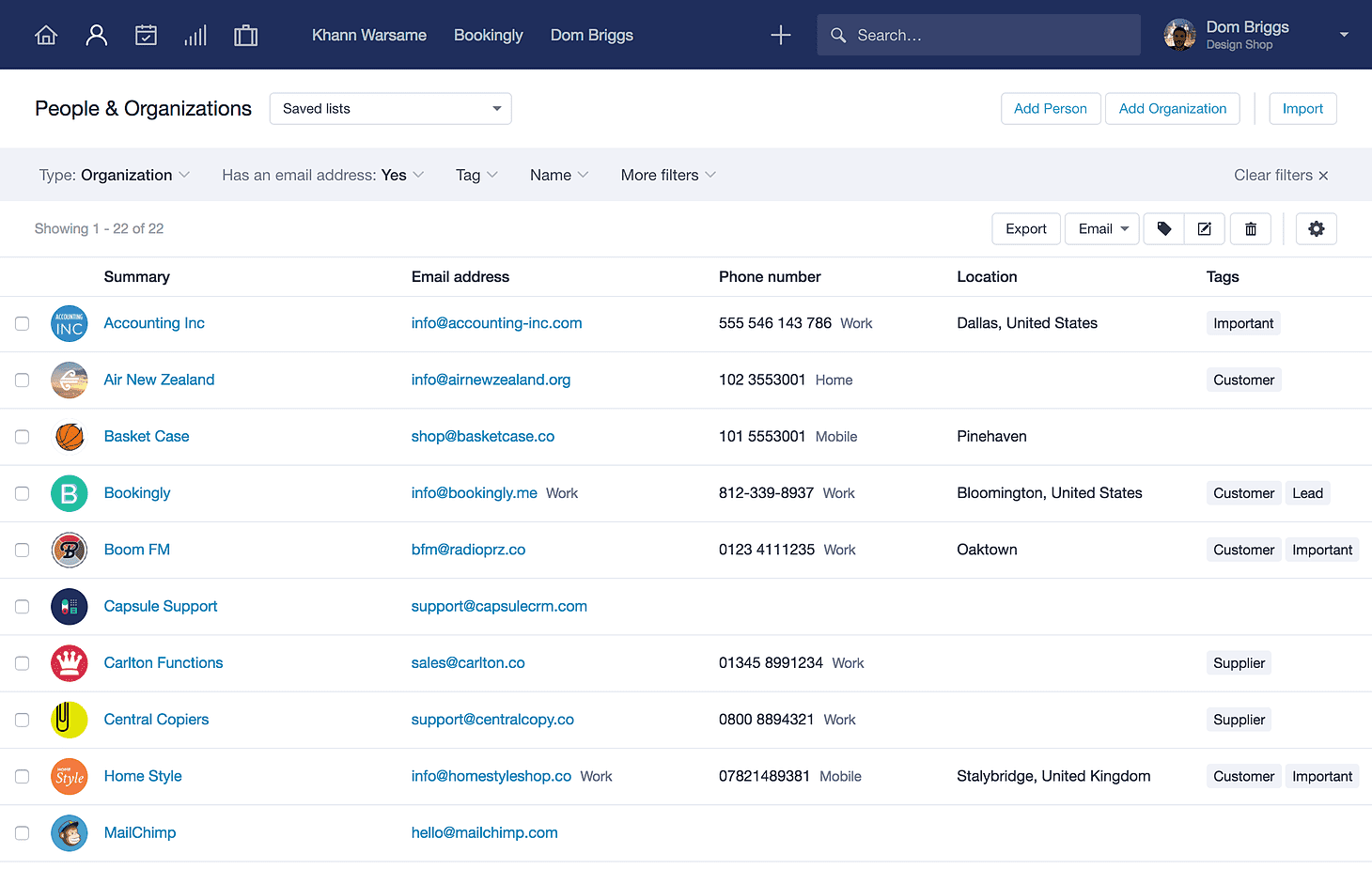 You can find out more about the inner workings of Capsule CRM via their website, the purpose of this blog really was to show how it relates specifically to sport, and more so after a sponsorship deal is sold rather than before.

So when a sponsor comes in, I create them as a so-called “Case” in the CRM, similar to a project.

I then have a number of “Tracks” which can be applied to the cases. These tracks are custom to me and what I have created. So say I set up a Track for pitchside advertising, I can then apply this to any client (or “Case”) that signs up for it.

All of these are tasks that need completing to activate the sponsorship. 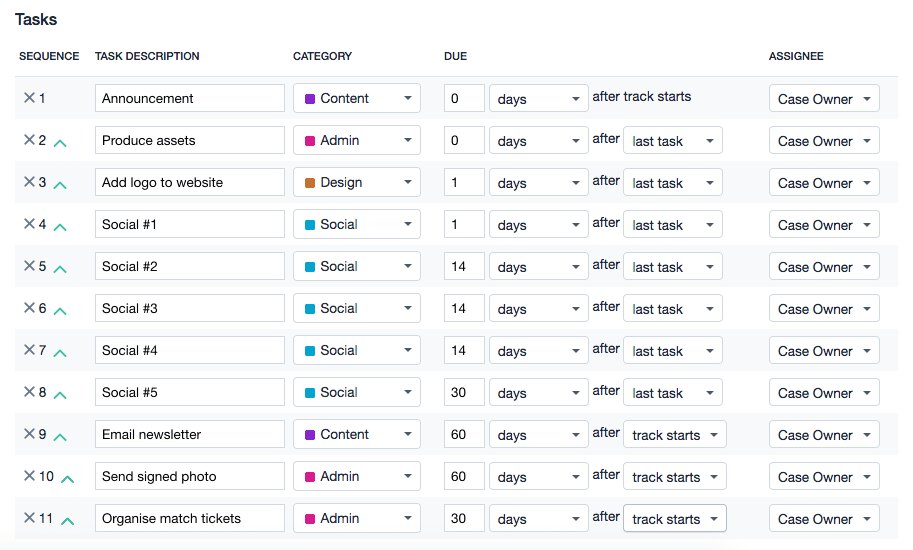 In the example above, this is a generic track that is applied to all sponsors. It ensures we meets all the contract obligations, as well as a few added extra touches.

You can set dates as to when each task would need to be completed – you can also assign them to different staff within the club (e.g. social media related tasks could be assigned to the social media manager).

Your case for a sponsor would then look something like the below:

These tasks are then filtered through to show on your dashboard and also in your calendar, so that in theory, your whole day (or your commercial execs) can be based around your CRM calendar (e.g. chase sponsor X, social media post for sponsor Y, organise tickets for sponsor Z).

Here is my calendar view within the CRM, which includes a mix of pre-sales, sponsorship and general tasks.

Notes can be added to each case for when you or another member of staff have contacted the sponsor, or perhaps when there is more information to be added (hopefully related to upselling!).

The tasks can be marked off when completed and remained archived, so that at the end of the season, you can produce a report for the sponsor and tell them when you activated each element – particularly useful if you’re trying to prove return on investment and/or convince them to renew for another season.

Would love to hear what other clubs do in terms of managing their sponsors, and also more than happy to meet up and talk you through Capsule CRM a bit more if you think it could benefit your club. Just reach out in the comments below or drop me a tweet or call!

One thought to “Managing sponsors and activation using Capsule CRM”