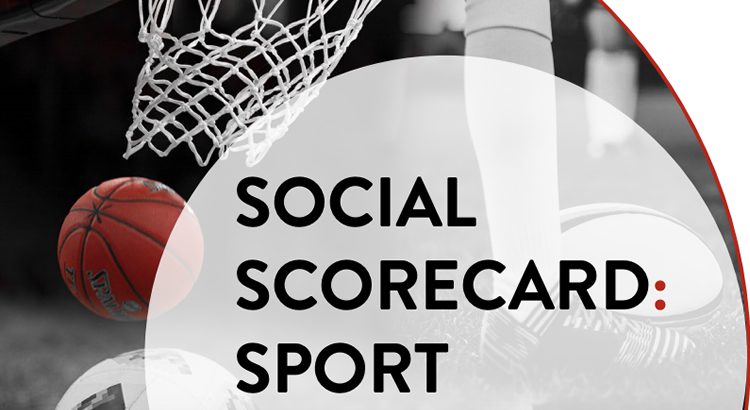 Search marketing agency, Red Hot Penny, releases its rankings of the best (and worst) clubs when it comes to engaging fans on social media

Our friends at Red Hot Penny, the search marketing agency, have launched its analysis, “The Social Scorecard: Sports” which examines how the UK’s top professional sports clubs across football, rugby, cricket, basketball and ice hockey are engaging with their social media followers, and if they’re effectively leveraging their followings to drive their retail business.

Facebook, Instagram and Twitter activity for each club was scrutinised and ranked along with total follower numbers, followers per seat at their stadium, average post engagement and engagement rate across all 3 platforms to give each club a score, with maximum possible being 100. The aim of the analysis was to see which clubs were really connecting with their fans, and to see how much potential their social channels have to boost retail activity.

Although they aren’t retailers, professional sports clubs are retailing.

With kit launches every season and a wide variety of merchandise available there is a significant opportunity to drive commercial revenues but a large number of clubs aren’t paying the necessary attention to social media to do so.

Although some clubs were posting retail related content (well done Tottenham, Hearts, Dundee and Manchester City) the vast majority made no mention of it, had no ads running on their profiles and were driving zero traffic to their retail sites. Clubs across all sports appear to be missing a massive opportunity to boost commercial returns through social media activity. Those that jump on this as a matter of urgency will reap the rewards very quickly.

Unsurprisingly the Premier League (PL) is prominent, with its clubs taking half of the top ten spots in the overall ranking. There were also appearances from the Scottish Premiership (SPFL) and Premiership Rugby at the top of the table. This is due in part to high average post engagement from Celtic and Rangers and a strong performance on Instagram from Northampton Saints and on Facebook from Exeter Chiefs. Celtic in particular have cultivated their Twitter activity through practical match information and analysis combined with posts celebrating their rich heritage. 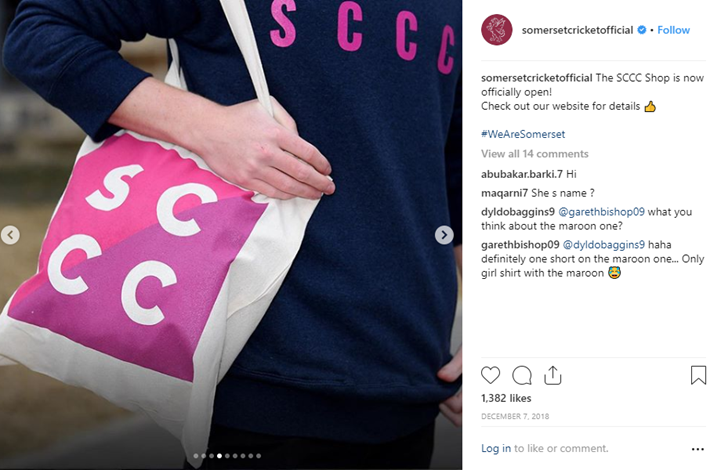 Somerset makes good use of Instagram to promote its retail game

The standout performer overall is Somerset County Cricket Club. Despite being up against the huge followings of the PL, it came out as the clear winner. Its Instagram activity was particularly strong, with an excellent use of video. Unlike the vast majority of clubs, Somerset has smartly leveraged its exceptional engagement to promote the retail side, with posts showing its own clothing line, from t-shirts to tote bags.

Surprisingly, one club that might need to rethink its social media strategy is Manchester United as they sit in 26th place, below clubs like Aberdeen, Leicester City and Hearts. While Man Utd has phenomenal follower numbers (116m) they are let down by poor engagement rates, positioning a lowly 68th in the rankings. An issue could be that they are a victim of their own success, as their global presence attracts followers, regardless if they are committed fans or not.

Smaller, regionally focused clubs are less likely to be followed by people with a casual interest, with only the most diehard of fans who are part of the club’s community likely to follow them. This means fans are more likely to engage with them on social media. For example, Scottish club Kilmarnock have the best average engagement rate across all 3 social channels despite flying under the radar on the global stage. 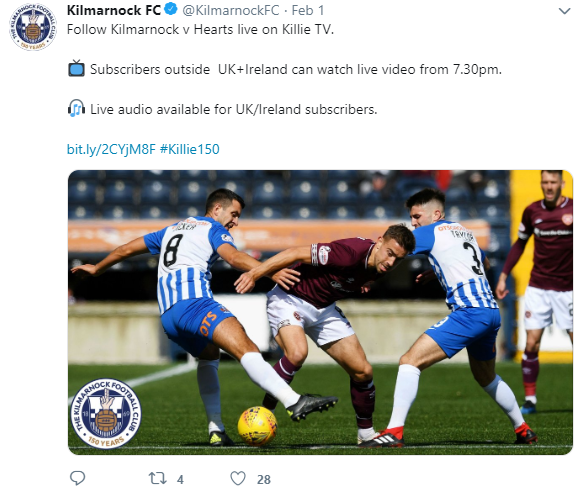 Kilmarnock battle for the title on the pitch and social media

The niche sports of Ice Hockey and Basketball trail behind the others, showing that these North American imports still have a long way to go to secure a significant following in the UK. However there is hope for them to progress. The British Basketball League (BBL) teams collectively have the highest ER overall at an impressive 1.74%. Elsewhere three top Elite Ice Hockey League (EIHL) clubs break into the top half of the table for overall score. Sheffield Steelers finish in 28th, beating two Premier League clubs (Newcastle and Burnley), thanks to excellent Facebook and Twitter use. 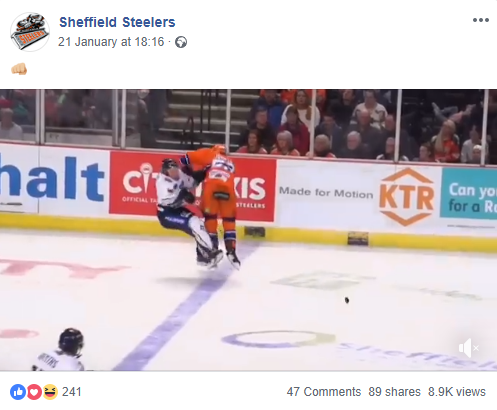 The top half of the table: 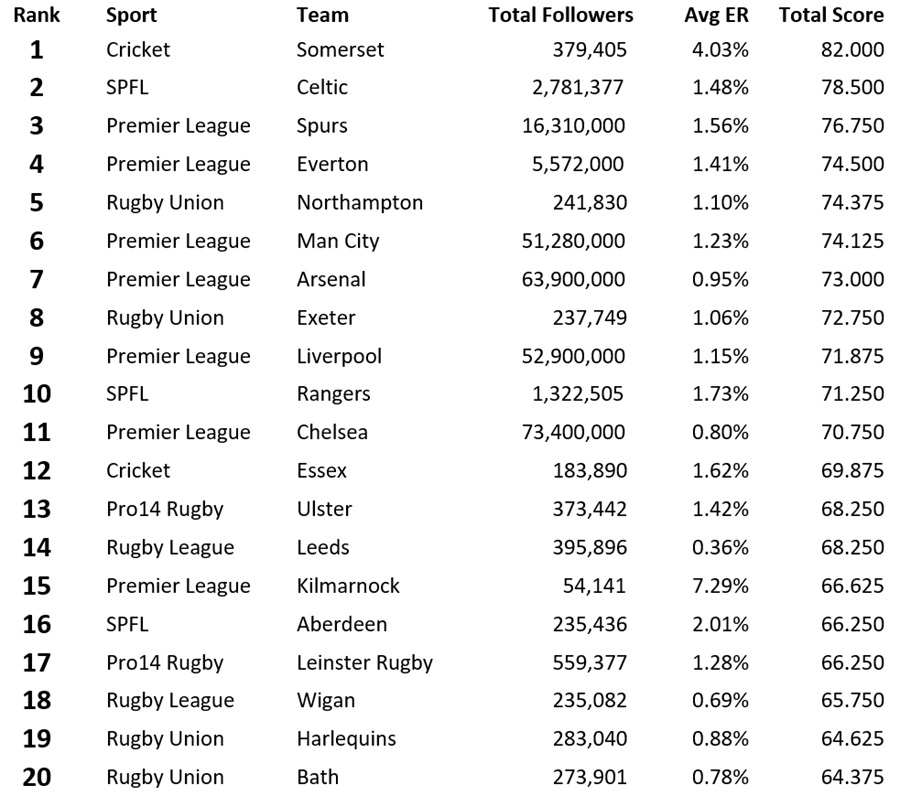 Russ Powell, head of marketing, Red Hot Penny comments “The big winners here are the SPFL, Premier League and Country Cricket clubs. All three have excellent average post engagement, and the SPFL and Cricket have strong engagement rates. It’s clear that these leagues’ social channels are powerful, but the next step is to think how they can use them to activate their followers.

“A lot can be said for the excellent engagement rate Basketball as a sport is seeing too. Although the size of the following is much smaller than other sports, the fans are clearly well engaged with their favourite basketball team”

“Very few clubs are using social media to support their retail business, so are missing out on a massive opportunity to bolster their revenue stream. The vast majority of social media profiles didn’t link to a club site, let alone a retail site. Many fashion brands would bend over backwards for access to ‘influencers’ such as professional sportsmen to wear their apparel. Yet clubs are just not using their assets in a smart way. It’s time for sports clubs to use what they have at their disposal and step up their retail ambitions.”

The agency looked at the top ten clubs from leading professional leagues across the UK and Ireland. The leagues were: