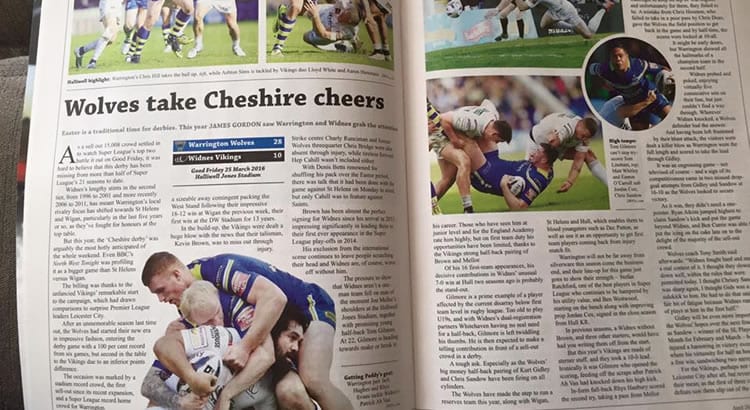 Even BBC North West Tonight were profiling it as a bigger game than St Helens v Wigan.

The billing was thanks to the unfancied Vikings remarkable start to the campaign which had drawn comparisons to surprise Premier League leaders Leicester City.

After an unmemorable season last time out, the Wolves had started their new era in impressive fashion, entering the derby game with a 100% record from six games, but second in the table to the Vikings due to an inferior points difference.

The occasion was marked by a stadium record crowd, the first sell out since its recent expansion, and a Super League record home crowd for Warrington.

Widnes played their part too, a sizeable away contingent packing the west stand following their impressive 18-12 win at Wigan the previous week, their first win at the DW Stadium for 13 years.

In the build-up, the Vikings were dealt a huge blow with the news that their talisman, Kevin Brown, was to miss out through injury.

With Denis Betts renowned for shuffling his pack over the Easter period, there was talk that it had been done with the game against St Helens on Monday in mind, but only Cahill was to feature against Saints.

Brown has been almost the perfect signing for Widnes since his arrival in 2013, impressing significantly in leading them to their first ever appearance in the Super League play-offs in 2014.

His exclusion from the international scene continues to leave people scratching their heads and Widnes are of course worse off without him.

The pressure to show that Widnes aren’t a one-man team fell on Joe Mellor’s shoulders at the Halliwell Jones Stadium, together with promising young half-back Tom Gilmore.

At 22, Gilmore is heading towards make or break in his career. Those who have seen him at junior level and for the England Academy rate him highly, but at first team level his opportunities have been limited, thanks to the Vikings strong half-back pairing of Brown and Mellor.

Of his 16 first-team appearances, his decisive contributions in Widnes’ unusual 7-0 win at Hull two seasons ago is probably the stand-out.

Gilmore is a prime example of a player affected by the current disarray below first team level in rugby league. Too old to play Under 19s, and no real need for a half-back for Widnes’ dual-registration partners Whitehaven, Gilmore is left twiddling his thumbs.

He is then expected to make a telling contribution in front of a sell-out crowd in a derby. A tough ask.

Especially as the Wolves’ big money half-back pairing of Kurt Gidley and Chris Sandow have been firing on all cylinders.

The Wolves have made the step to run a reserves team this year, along with Wigan, St Helens and Hull, which enables them to blood youngsters such as Dec Patton, as well as use it as an opportunity to get first team players coming back from injury match fit.

Warrington will not be far away from silverware this season come the business end, and their line-up for this game just goes to show their strength – Stefan Ratchford, for mine one of the best players in Super League who continues to be hampered by his utility value, and Ben Westwood starting on the bench, along with improving prop Jordan Cox, signed in the close season from Hull KR.

In previous seasons, a Widnes without Brown, and three other starters, would have had you writing them off from the start.

But this year’s Vikings are made of sterner stuff, and they took a 10-0 lead. Ironically it was Gilmore who opened the scoring, feeding off the scraps after Patrick Ah Van had knocked down his high kick.

In-form full-back Rhys Hanbury scored the second try, taking a pass from Mellor who had burst through off Aaron Heremaia’s reverse ball and rounding Matty Russell.

Warrington have shown great composure in their six wins so far and themselves appear to have grown a lot from their disappointing 2015 campaign. Sandow’s spectacular last second drop goal to win the game at Salford being their highlight so far.

You felt that Widnes would have to be watertight to keep on top of Warrington, and unfortunately for them, they failed to be. A mistake from Chris Houston, who failed to take in a poor pass by Chris Dean, gave the Wolves the field position to get back in the game and by half-time, the scores were locked at 10-all.

It might be early doors, but Warrington showed all the hallmarks of a champion team in the second half.

Widnes probed and probed, enjoying virtually five consecutive sets on their line, but just couldn’t find a way through. Wherever Widnes knocked, a Wolves defender had the answer.

And having been left frustrated by their blunt attack, the visitors were dealt a killer blow as Warrington went the full length and scored to take the lead through Gidley.

It was an engrossing game, not televised of course, and a sign of its competitiveness came in two missed drop goal attempts from Gidley and Sandow at 16-10 as the Wolves looked to secure victory.

As it was, they didn’t need a one-pointer. Ryan Atkins jumped highest to claim Sandow’s kick and put the game beyond Widnes, and Ben Currie was able to put the icing on the cake late on to the delight of the majority of the sell-out crowd.

Wolves coach Tony Smith said afterwards: “Widnes fought hard and made a real contest of it.

“I thought they slowed us down well, within the rules that were permitted today. I thought Chrissy Sandow was sharp again, I thought Gids was a good sidekick to him. He had to do that under a fair bit of fatigue because Widnes ran a lot of plays at him in the first half.

“It’s been a nice start for us. [But] we don’t spend a lot of time focusing on that because there’s a long way to go. I thought we were a little bit flat in the first half. In the second half we were very committed, we showed that defending our try-line in the second half. We had about three plays to their 31 at that point.