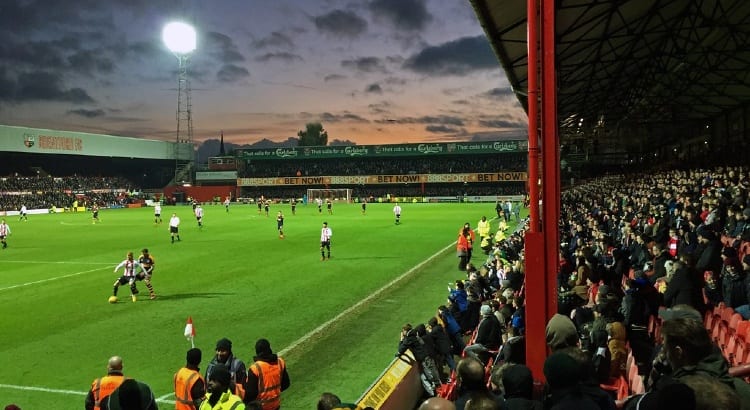 Griffin Park is a football stadium in Hounslow, Greater London. It has been the home of Championship football side, Brentford FC, since 1904 when the ground was opened.

It has an official capacity of 12,300 and has previously been home to rugby league side, London Broncos (2002-06) and the Chelsea Reserves (2007-10). The stadium is situated in the middle of a residential area and is famously the only ground in England to have a pub on each corner.

As previously mentioned, the stadium has a pub on each corner, meaning that there isn’t a real need to venture far away from the ground to find somewhere to eat or drink. These pubs are The Griffin, The Princess Royal, The Royal Oak and the New Inn, with the latter predominantly used by away supporters.

Aside from food, there are plenty of other activities to enjoy. The Musical Museum and Hen Corner farmers’ market are all nearby, while the Royal Botanic Gardens provide picturesque walks. The famous London landmarks are only seven miles away and can be accessed via Northfields Tube Station, which is within walking distance of Griffin Park.

By car: Leave the M4 at junction 2 and take the A4, going around the Chiswick Roundabout and coming back on yourself. Continue along the A4 and take a left onto the B455 (Ealing Road) at the first roundabout. The ground is located about half a mile down this road on your right.

There is no actual parking available at the stadium. Aside from a small pay-and-display car park on Layton Road (the first right off Ealing Road), there is only really street parking, although there are some resident-only parking schemes which fans will need to be aware of. Some roads in the surrounding area do offer pay-and-display; however, an alternative could be to rent a private driveway near to the stadium.

By train/underground: Brentford Railway Station is around a five-minute walk away from Griffin Park. This station receives trains from London Waterloo, with services running every 15 minutes on a typical matchday. As previously mentioned, Northfields Tube Station is only a short walk from the ground, while South Ealing Station is a similar distance away.

The highest attendance set at Griffin Park was in February 1949, when 38,678 fans attended to see Brentford take on Leicester City in the FA Cup Sixth Round.

Brentford is based in the borough of Houslow and located beside the Grand Union Canal. Home to Brentford FC, there is a strong sense of community spirit in the area. There are a lot of good schools in Brentford, making it a popular choice for families and, with a range of green spaces dotted about, it is the perfect spot for those commuting into London’s city centre. Whether you’ve got a traditional period home in Clifdon or an apartment in Brentford Lock West, The Property Buying Company can offer you a fair cash sum and a completion date to suit you. So, whether your property has been on the market for over 6 months or you’re relocating and need to sell your house fast, The Property Buying Company can help. All legal fees are included so there’s no hidden costs.