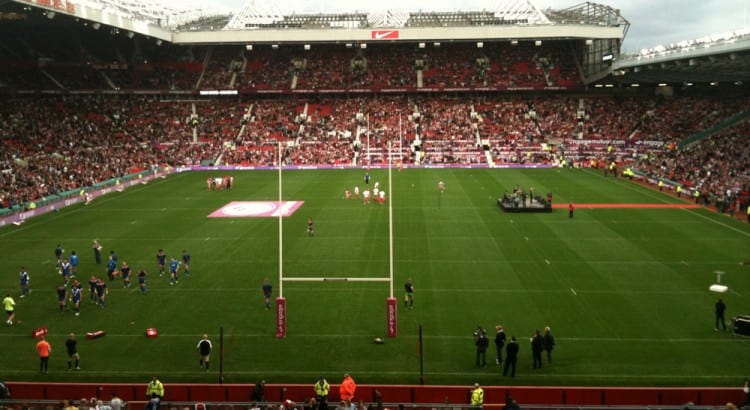 The Theatre of Dreams. I am fortunate enough to have enjoyed games at Old Trafford in all four stands, but also to have experienced a number of the hospitality suites inside the ground too.

It is a vast stadium, the biggest in the country outside of Wembley. It has developed significantly over time, with only the South Stand limited to just one tier because of the railway track that runs behind it – and the club’s inability to gain planning permission to do anything with it, due to the disruption it would cause to one of the busiest railway lines in the country.

Unlike say Anfield, by and large the seats at Old Trafford do give sufficient leg room in most places, though certainly in the lower tiers it is tight. Of course, this is a consequence of all-seater stadiums being brought in and the grounds not being developed initially for that purpose.

Sitting near the front at Old Trafford is an experience. You probably need to be about eight rows up to be at ground level, due to the fact that the pitch dips around the sides to accommodate the undersoil heating.

It causes no issues for players in football, but it’s certainly precarious for rugby players as there’s a dip down to the advertising boards at the end of the in goal area.

The best view is undoubtedly in the middle of the north stand. You are close enough to feel the atmosphere on the pitch and also to see widespread across the pitch.

That’s not to say the views elsewhere are bad. In fact, it’s one of those grounds where the view from anywhere is spot on.

For the brave amongst you, there is the third tier of the north stand. This is quite high, and gives you almost a birds eye view of the action. The nature of the stand is almost as if its a hammock – you can certainly feel it swing when a goal goes in!

What’s always struck me about Old Trafford is that despite the size of the ground, the concourses are generally not always rammed, and you can actually get served in a decent time. Of course, this limits your ability to roam the stadium.

Getting out can be a nightmare, it’s packed around the stadium after matches and the traffic isn’t great too. Your best bet is to park a fair walk away and hope that you can avoid the traffic – and the extortionate parking charges that come with parking close to the ground on match day.

If you ever get chance to experience hospitality at Old Trafford, you’ll be a fool not to take it. Premier League standard hospitality of course, the food is great, and the variety is great too.

There’s a nice spec in the Stretford End, directly behind the goals in the middle block that is linked to a hospitality suite, that is perhaps my favourite place to watch a game at Old Trafford.

The press box is tight too. I imagine it will be packed for football. There is a screen at the foot of the stairwell for press usage. The press box could certainly do with a bit of an update, though it is of course limited by the space available in the South Stand.