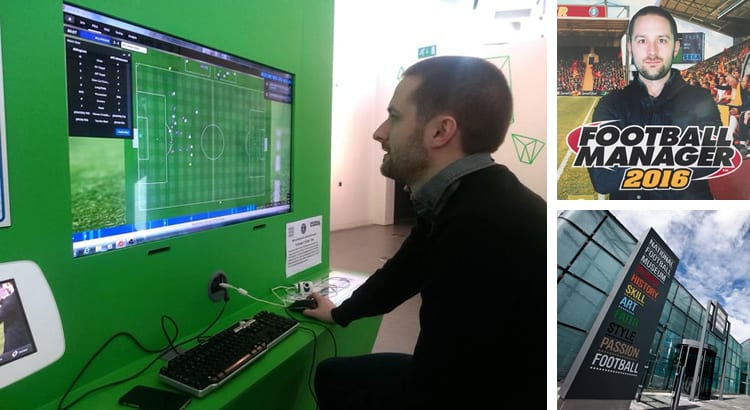 Featured in the museum’s ‘Pitch to Pixel: The World of Football Gaming’ exhibition, the challenge involves 100 different managers playing the game on the same save, for at least an hour each, over 100 days.

As a Football/Championship Manager player of almost 20 years, it certainly was an interesting idea. Taking over AFC Wimbledon, the experiment was to determine how much of an impact changing manager regularly would have on a game save.

Every manager who plays will be part of an official Guinness World Records attempt: ‘Most Contributions To A Save File on a Video Game’

Having got to the excellent venue and signed myself in, I got to work…

It’s a bit like Alan Curbishley taking over at Newcastle now.

Except if he’d been living under a rock for the past five years.

That’s how it felt as I took on the FM100 challenge, a world record attempt to get 100 managers play on one save on 100 consecutive days.

AFC Wimbledon were five games in to the 2020/21 season as I sat down at the National Football Museum in an impromptu scenario which meant no pre-thinking had gone in to what I was going to do.

It’s fair to say that my addiction to Football Manager has waned in recent years, mainly because my two preferred styles of play seemingly don’t work. 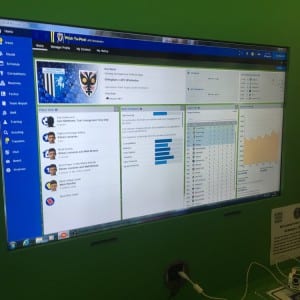 A quick scout of their squad identified no real stand out players, a few duds and a couple of average loanees.

I opted for the usually solid 4-1-3-2, thinking I’d learn more about the players by showing some resolve.

A fairly encouraging 2-1 Johnstone’s Paint Trophy defeat at Gillingham was followed by a 3-1 loss at Shrewsbury.

It seemed that both strikers were fairly prolific – Tom Youngs and Tony Daly – though for two strikers who appeared to score a lot of goals, they didn’t half miss a lot of chances.

My right back, O’Connor, seemed to play the Gordon way, getting forward down the right and getting plenty of crosses in. I quickly identified the need for a similar player at left back, and I eventually got my third choice on loan having been beaten to the signature of two other players.

It turned out you don’t need long to experience the real beautiful buzz (for buzz, read frustration) of Football Manager.

1-0 up over Plymouth hunting back-to-back wins, a defender effectively crossed the ball for their striker off a throw-in earning them an injury time equaliser.

If that wasn’t bad enough, a 2-0 lead over Scunthorpe was squandered, and I then missed a penalty at 2-2 and went on to lose 2-4. Worse still, my first choice left back target who I missed out on earlier scored the opener!

That was on the rare occasion that my strikers managed more than one goal in a game – I drew five games 1-1 in my 7 game stint.

What do Wimbledon need in this save? Perhaps a goalscoring midfielder and they won’t be too far off.

Always have a back-up GK
As I scoured the loan market, I foolishly terminated the loan of my back-up goalkeeper, leaving me with just youth team back-up to number one James Shea. Sure enough, four games in, Shea gets injured and I’m stuck playing a 16-year-old one star silver rated kid in goal. They might as well have had me in net.

Even in five years, my style of play still won’t get the results
So I get my teams playing good football, short passing and using the full backs. But I still don’t finish teams off. And this has happened on most FM’s for the past five years. It doesn’t seem that getting further in to the game helps either.

Prolific strikers don’t guarantee success
The most pleasing aspect of my run of games was just how prolific Tom Youngs and Tony Daly were. At least one of them scored in every match. The positive for the long-term success of the game is that they are both young, and you’d imagine if Wimbledon are to get out of League Two, then they will be contributory factors. That said, even having prolific strikers doesn’t get you far without the full package. Even though they scored regularly, they still missed a hatful, and I still dropped a load of points from winning positions.

The game’s nice without team talks
At first, i thought the previous manager had been slapped with a stadium ban. But it turned out the version of FM I was playing was Touch, and as such there was no need for team talks. And do you know what, I didn’t miss them. Nor did I feel like it mattered too much. It put more pressure and importance on my tactical tweaks in game. I guess for casual FM’ers like me, the unknown around the impact of team talks and training is always there as a convenient excuse for little success. Not this time.

Even watching someone else playing FM is interesting
Playing at the National Football Museum meant I was virtually an exhibit. Playing Football Manager on a big screen in the centre of their Pitch to Pixel room which has all sorts of games in there, including FIFA, Pro Evolution Soccer and an old personal favourite, Sensible Soccer. Numerous people dropped by to ask me how I was getting on, watching a few games. Shout out to the West Ham fan who was there to oversee my best victory, I only wish he’d stayed around longer.

If anyone else wants to use me for Football Manager experiments, I am available!