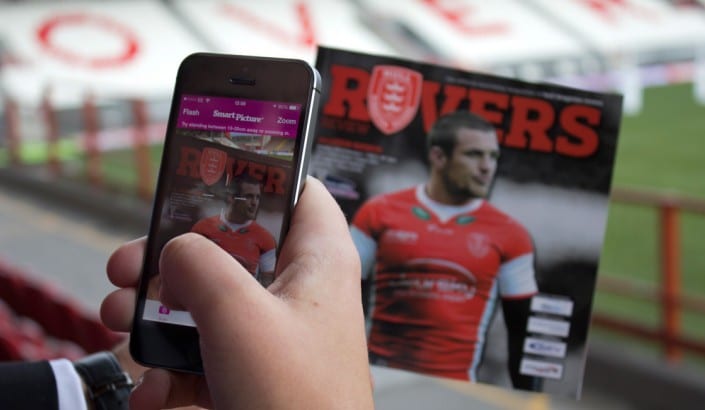 Guest Post: James Gordon is the MD of digital sports agency, Sportbox Media, set up in 2010 through his love of sport and digital. A Journalism graduate from the University of Central Lancashire, he was head-hunted for a job at leading digital agency Fast Web Media, where he worked on the official Carling Cup website, rugby sponsorship activation accounts for O2 and Leaders in Football.

SmartPicture is a new app developed by Eon Visual Media, available on Google Play and iTunes store, that enables fans to scan images on the match programmes with a mobile device to access a vast range of online content tailored to each fixture.

It was used for the first time in the home game against Castleford last Friday, and supporters can download it now to get access to video footage, competitions, team statistics and the club’s online commerce site. The app also promotes interactivity with and between the fans through social media.

“All print publications are struggling, and the match day programme is no different. Instead of trying to grow it, you’re just looking at ways you can maintain it.

“A lot of the content in the programme is already in the public domain before the match, so the app now enables us to create more exclusive content and add value back in to the programme.

“It means the programme is no longer confined to the number of pages. We don’t want to stand still, and we want to continue to develop and add more features, such as a man of the match vote.”

The Robins revealed their squad numbers one by one via Twitter earlier this year, from 30 all the way down, and are holding mini fans forum events every week which includes highlights of games.

They have seen a growth in their Twitter following over recent months due to a number of these initiatives, and they hope to hold live web chats in the near future.

With a vast array of digital technologies at every club’s disposal these days, Franklin admits it’s difficult to keep up, as well as maintaining their marketing efforts in traditional areas.

The beauty of the new app means that their traditional programme can run unaffected, and readers won’t be able to see a noticeable difference from pre-app productions. He added:

“It’s very difficult. There are various ways to do things, and I don’t think there are many organisations who have got it spot on. The web and social media are so important, but there are still people who don’t use of any of these, so we’ve still got to make things like the programme available.

“The flip side is there is the younger generation who want everything quickly and up to date, and there are so many platforms to talk to them on. It’s a balancing act, combining that with fulfilling traditional duties such as local newspaper and radio coverage, which are so important to the club.”

The challenge in making these new platforms work is them being embraced by other clubs too. With clubs not competing for the same fans, on the basis that someone wouldn’t switch allegiance, if a club finds that something works, then others should follow suit.

And Franklin says that the app will be even better if more clubs sign up. He added:

“It brings the possibility of cross-club activity. We could then work with say Castleford to produce content for their fans, which means we can potentially engage with everybody in the stadium.”

During the Castleford game more than 50% of people who bought a programme at Hull KR’s match scanned it using the app. So a great starting point for engagement and interaction. Could this be the start of something big?