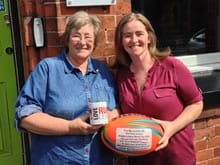 As owners of leading rugby league website www.loverugbyleague.com, we were asked by World Cup organisers to take part in their “#findourballs” campaign, where 100 balls were hidden in various places to commemorate the 100 day countdown to the tournament.

We were asked to hide one of the balls, and we hid it outside our offices, to see if people could track down where exactly Love Rugby League was run from.

Several clues were given out on social media, and Paula and her mum eventually found the ball.

They won tickets to the New Zealand v Samoa World Cup game at the Halliwell Jones Stadium, Warrington, less than a mile from our office!