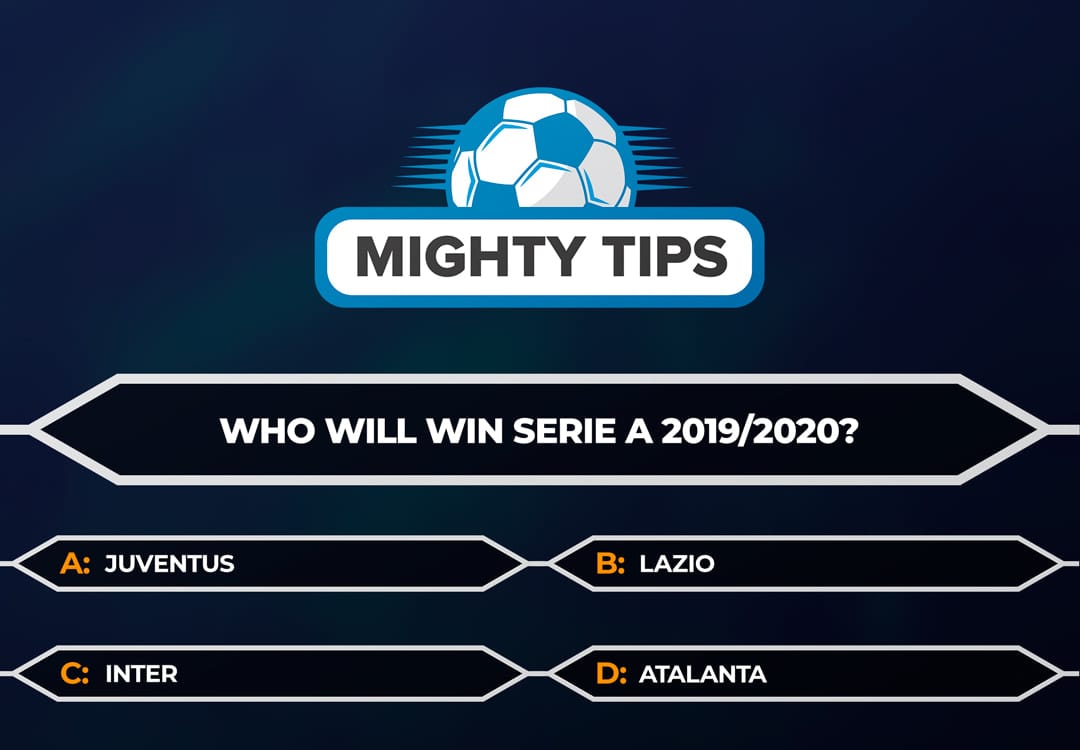 Who will win Serie A 2019/2020? You’ve come to the right place. In this article, we will go over the winner predictions from the Mighty Tips team and give you analysis on the winner of Serie A.

How Are The Footy Teams Performing This Week

Our Italian league predictions for the Serie A winner of 2019/2020 aren’t as cut and dry as we would have expected. Juventus and Inter have been the teams to watch out for in the past.

Roma and Napoli have been offering Juventus stiff competition in the last few years. Thanks to Lazio striker Ciro Immobile efforts Inter, Roma, and Napoli aren’t as close to the trophy this year.

Juventus is one of the biggest names in Serie A – in Italy and around the globe. It’s no surprise they usually make into the Serie A 2019/2020 winner predictions. Juventus is at the top of the table this season, but Lazio is a point behind them as of March 2020. Juventus have held the title so long it might just not be their year.

Now and then, in the history of Serie A, a team manages to slip a winning title or reign between Juventus’s wins. Yet Juventus always seems to win out in the end. Juventus is at number one this year, as they have been for the past eight seasons.

And, even if Lazio does manage to take the crown this year, they still won’t be able to supersede Juventus’s reputation as Serie A winners, with an eight-year winning streak record and massive 35 winning titles. If history counts for anything, Juventus will always be back.

Lazio seems intent on leaving Napoli and Roma in the dust, breaking up the Juventus and Inter rivalry, and stealing Juventus’s 9th in a row title from under their nose. Perhaps this is Lazio’s year!

The team is familiar with placing in some of the top spots in the league in past seasons. They have taken a few 2nd and 3rd places since the early 90s and won the title back in the 1999/00 season. Lazio really have everyone wondering who will win Serie A 2019/2020.

Thanks to Ciro Immobile’s going on a goal-scoring tear this season, Lazio is pushing for a win instead of just 2nd or 3rd. Serie A 2019/20 may just be their Serie A winner year – Lazio are neck and neck with Serie A winners Juventus with a one-point difference in March 2020.

Ciro Immobile’s goals are stacking up in Lazio’s favor. He’s not unfamiliar with placing at the top either. Since 2013/14, he’s placed twice as a top scorer in the Serie A. He’s one of the few strikers who has managed to do that, which speaks volumes of his value in any team.

Inter is more likely to be battling Atalanta for 3rd place than Lazio for 2nd or Juventus to place as the Serie A winners. Inter hasn’t been in the best form over the last few years, hardly placing anywhere at the top three since 2011. They are trailing behind Lazio and Juventus this week with eight and nine points, respectively.

They are still placing 3rd, a better performance than they’ve had since the 2010/11 season when they placed 2nd. Striker Romelu Lukaku has been working hard to get Inter back at the top. This season marked a return to form for him after his injuries last season.

Maybe this year is a good year for Inter to get back into form and take a top spot next season. Find out what we think in our Serie A tips at the bottom of this article.

The Trailing Teams – Napoli and Roma

It seems previous contenders for 2nd and 3rd place, Napoli and Roma are performing worse than expected, both teams have fallen behind at 5th and 6th place, with Atalanta squeezing their way in-between them and Inter, Juventus, and Lazio in 4th.

Thanks to striker Josip Iličić, Atalanta is also a surprise top performer this season, though they did settle in 3rd place last season. With a quarantine of the team going on at present after they played Valencia in the Champions League Round, it’s hard to say if they will be competing for Serie A winners, though.

Now for the Serie A tips from the experts at Mighty Tips for making your bets.

Here are some predictions for who will likely be the 118th Serie A winner. We hope these Serie A betting tips help you to make your bets the right choice.

Who Is Most Likely to Be The Serie A Winner?

If you want to go with a safe bet, then Juventus is the ticket to go for. However, Lazio is shaping up to be a sure contender, especially if you’re looking for a wild card with a bit more lucrative odds for your wager on the Serie A predictions.

Given Ciro Immobile’s past and current performance, he’s the candidate in our Italian league predictions who is pitted to achieve top goalscorer this season. If he did, it would be the third time in the Serie A that he has accomplished this.

With 21 vs. Immobile’s 27 goals Ronaldo would really need to do some catch up to achieve top goalscorer this year.

We hope you enjoyed our Serie A 2019/2020 winner predictions and they can help you to make the right choice this season. Good Luck.