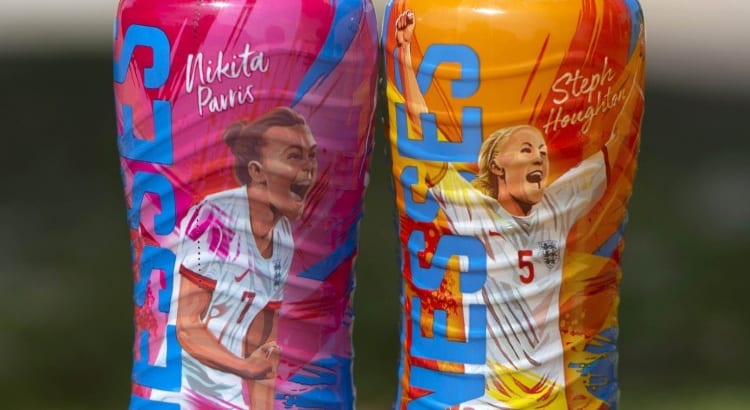 The BBC in hot water over their Change the Game campaign? Everton looking to grow into new markets. Here’s a round-up of some of the exciting things happening in the industry right now…

Lucozade Sport have launched their World Cup campaign with the England Lionesses team, and Head of Marketing, Claire Keaveny, has admitted they are trying to make the brand more culturally relevant.

Lucozade are the ‘official sports drinks and hydration partner’ of the women’s and men’s senior teams, with the World Cup kicking off on Friday 7 June. The energy drink company have rewritten Baddiel and Skinner’s ‘Three Lions’ anthem in a bid to get fans behind the national side.

They have also offered 90,000 minutes of free pitch time nationwide through Powerleague and Goals football centres to encourage more females to take up the sport. Despite this, Keaveny says they needed to try something different to engage with a wider audience.

Speaking to The Drum, she said: “We’re living in an attention-deficit generation and people are switching off adverts.

“We have to create campaigns that are culturally relevant and mean something to people so that they want to talk about it. Hence the Lionesses campaign, tapping into a real cultural moment but in a way that resonates with consumers.”

We all know how important stadium naming rights can be for a business’s revenue streams, with Arsenal reportedly earning £200m from their new deal with Dubai-based airline Emirates.

The latest naming deal to be agreed is for Los Angeles’ new $5.2billion stadium, which will play host to the LA Rams and LA Chargers. A deal has been agreed with private lender Social Finance for naming rights, according to reports.

The move from Social Finance is their latest venture into sports marketing. The company sealed a multi-year deal as the main sponsor of the Big Ten Conference men’s basketball tournament, while they also sponsored the 2019 NBA play-offs.

Everton are hoping that the Premier League’s new TV deal in sub Saharan Africa will grow the profile of the club in what they describe as a “very important market”.

One top-flight game per week will be shown in the region, with Everton already having links to the continent. They are sponsored by Kenyan online sports betting company SportPesa and are scheduled to play a pre-season friendly there in July.

On the deal, Premier League Director of Broadcasting Paul Molnar said: “These rights are important in ensuring the widest possible access to our competition for the many passionate Premier League fans across Africa.”

The agreement begins next season and will last for three years. Everton will be hoping they are selected as frequently as possible to maximise their African exposure.

The BBC have been accused of plagiarism after author Yomi Adegoke claimed the title of her co-written book, Slay in Your Lane, had been ‘ripped off’ in the company’s latest campaign.

The Change the Game campaign was launched recently to highlight the amount of women’s sport being covered on various platforms this summer, with a TV advert featuring South London rapper Ms Banks at the centre of their promotional push.

However, the debate concerns the accompanying billboards, one of which used the name of her book. ‘Slay in the Game’ is classed as a registered trademark in the UK, meaning its use in promotional material is limited.

Imagine being a white woman creating an 'eMpOwErInG WoMeNs' ad campaign for @BBCSport, and choosing to rip off the *TRADEMARKED* name of a book specifically aimed at uplifting black women (in an almost identical font ?) pic.twitter.com/nojQRMX1Bq

Adegoke hit out at the corporation on Twitter, accusing them of knowingly stealing the phrase, which she says is used to ‘uplift black women’. She also added that no-one at the company had reached out to contact her yet, although the first wave of the campaign is set to end very soon.

The BBC issued a statement on the matter, saying: “The BBC sought legal advice before going ahead and were advised that the use of the headline ‘Slay In Your Lane’ in our Women in Sport #ChangeTheGame marketing campaign was sufficiently far removed from the goods and services covered by the trademark registration in place.”