Fans of the World Series have been exposed to a new live updates feature through Facebook Messenger.

Though not formally announced, it would appear to be a trial run of an attempt for Facebook to compete with Twitter when it comes to following live sporting events.

It was first highlighted by Twitter user, Brandon Painter (@bpaint), who revealed that during a conversation about the World Series with a friend, he was prompted to subscribe to updates which were then fed in to his messenger conversation with his friend in between their own chat. 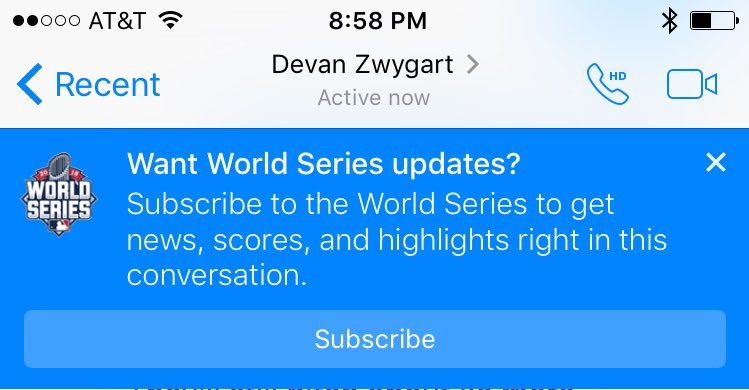 Updates included live scores, photos and quotes. The updates come from a user called “World Series” which is set up as a business profile, giving you the ability to like, leave reviews and message them.

It hasn’t gone down too well with some users, who have left reviews bemoaning the service.

Another user comments: “Thanks I think I finally got rid of it. Couldn’t have done it without your help! Thanks so much. I couldn’t use my messenger because of it. I like baseball but I want to watch the game not get a play by play every five seconds. Thanks so much!”

Others reported the service: “They won’t stop sending private FB messages no matter how many times I tell them!”

It seems that the stealth test has had a negative impact, perhaps more so because it isn’t immediately obvious how to unsubscribe.

The question remains though – do you want your conversations on Facebook Messenger to be hijacked by live sport updates?

Judging by this test, probably not. But it will be interested to keep an eye on how this progresses.