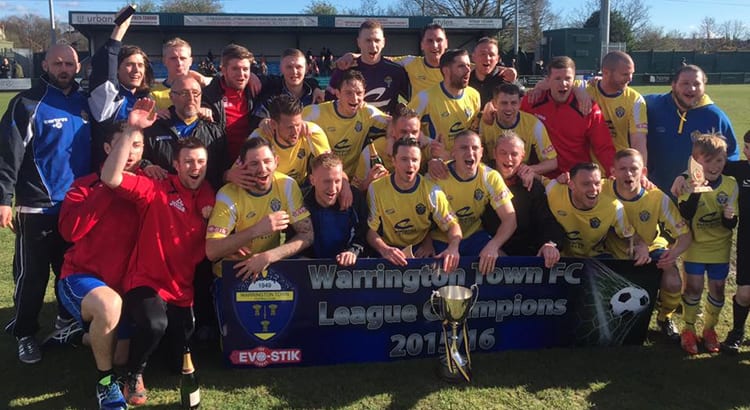 Our hometown club Warrington Town secured the most prestigious league title in their history and with it promotion to the seventh tier of the football pyramid at the weekend.

Warrington is one of the biggest towns or cities in the UK without a Football League club, and it is now just three promotions away from realising that dream.

My involvement with the club started some four years ago, though I started watching them regularly three or four years prior to that.

During the past 18 months, I have been privileged enough to live tweet and write the official match report at the incredible FA Cup first round win over Exeter City in front of a sell-out crowd at Cantilever Park, a League Cup final victory at Edgeley Park last April and now the title-winning game over Prescot Cables. 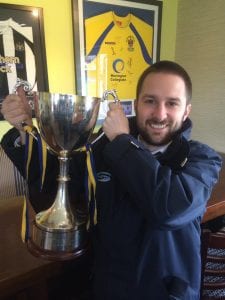 Football isn’t always that kind, but those three events will stay in my mind for a very long time.

There is a fantastic team behind the scenes at Warrington Town, led by inspirational chairman Toby Macormac, that includes a host of passionate directors, tireless volunteers and the most dedicated supporters in non-league.

To see the emotion amongst long-serving directors and even more so fans such as Rob Wood, who have followed the club through thick and thin for 20 years or more, is what moments like the weekend are all about.

Not only has the club racked up a record breaking points tally and goals scored in a season, they have also increased their average attendance to 411, including breaking the 1000 barrier twice.

There is a huge amount of potential in Warrington Town, and the promotion gives them the momentum to carry on going.

The new kit and merchandise range for 2016/17 was launched at the weekend, another sign of the significant steps forward the club has made in the past five years. To get the Warrington Town brand out there you need people to be wearing it and talking about it, and that’s certainly happening.

There also seems to be a willingness for co-operation from the town’s biggest sports club, Warrington Wolves, with the potential to play games at the Halliwell Jones Stadium surely an option should the club rise to National League North or beyond in the future.

While I’m personally a fan of Town retaining its own identity by playing in its own ground, there is of course a financial reality to the situation.

But that’s why I’m really excited about the opportunity of working to help the club achieve its aims.

Over the course of the summer, there will be some new marketing and ticketing initiatives implemented at the club, and very soon a new website.

There is nothing like the challenge of building something up from a small acorn to something big and it is certainly a challenge that gets the heart racing.

It’s perhaps typical of me that instead of enjoying the moment at the weekend, I was already looking forward to next season. But it’s that hunger and drive that keeps you going to achieve even more success.