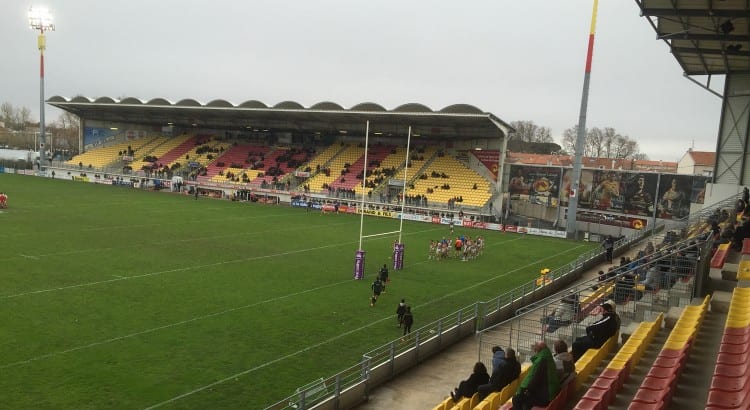 Stade Gilbert Brutus is the home of the French Super League team, Catalans Dragons, and is named after a former French Championship winning Perpignan captain.

Based a short bus ride out of the centre, it is one of two rugby grounds in fairly close proximately, the other being Stade Aime Giral, the home of rugby union side USA Perpignan. The Dragons also played there when Stade Gilbert Brutus was being renovated.

Watching sport abroad is always a unique experience, wherever you go.

Since the Dragons inception in to Super League in 2006, the city of Perpignan has embraced the fortnightly visits of rugby league fans from the UK.

There are plenty of bars who are welcoming within the grounds of le Castillet, and there is often a vibrant atmosphere on a match day.

You can catch the number 4 bus to the ground from outside le Castillet on match days, which is free with a match ticket. The stop is right outside the stadium, and there return bus picks you up from the same location, again free.

A stone’s throw from the bus stop is a pub on the corner, adorned with various rugby league shirts and scarves that have been left by fans over the years. In the first few years I visited Perpignan, this place was particularly noisy and bouncing with fans, enjoying banter with the locals as they passed the traffic lights in front.

There are a couple of different entry points to the ground, which remind me more of the cricket style grounds in the UK rather than football. It can get fairly busy ahead of a game.

Upon entry behind the main stand, Puig Albert stand, there is plenty of room to congregate and there is often entertainment in place. A large shop stocking all sorts of Dragons merchandise, and also some NRL gear, is right ahead of you, with various bars and hospitality either side.

Around the corner, a hut serving food and drink is always well populated. Be aware that you need to pay for tokens and then exchange tokens for drink or food – don’t queue up for food/drink without a token, otherwise you will have to queue up again!

There is plenty of space and free movement around the outside of the ground even once you’re in the turnstiles.

The main stand is a curved style stand behind one of the goals and has been developed in the last 10 years. As you sit in that stand, to the left is a small permanent old fashioned stand which is sandwiched by two temporary seating stands which add to the attendance. The passionate Catalans crowd certainly generate some atmosphere on that side.

Away fans are typically positioned in the corner of the Puig Albert stand, enabling a bit of banter with the home fans – sadly something usually lacking when Catalans visit the UK.

The other stand is to the right, along one side, and includes the changing rooms and press box. This appears to be a similar style architecturally to the Puig Albert stand, though perhaps a few years older.

The far side of the ground isn’t an option for fans. There is a building there, which I’m not sure whether it is part of the ground or not. So it’s a three sided ground, and you have a fine view from any vantage point. The lowest rows are elevated from the pitch, and you also have the option of wandering down to stand along the rails by the pitch.

The seating is comfortable, different to the usual English-style fold up seats – they are permanent, unmovable plastic seats that are attached to the concrete. It does make it a little awkward if someone from your row wants to get out though.

As an experience, visiting the Dragons is a true franchise club experience. Usually a large and passionate crowd, plenty of colour and a great facility to boot.