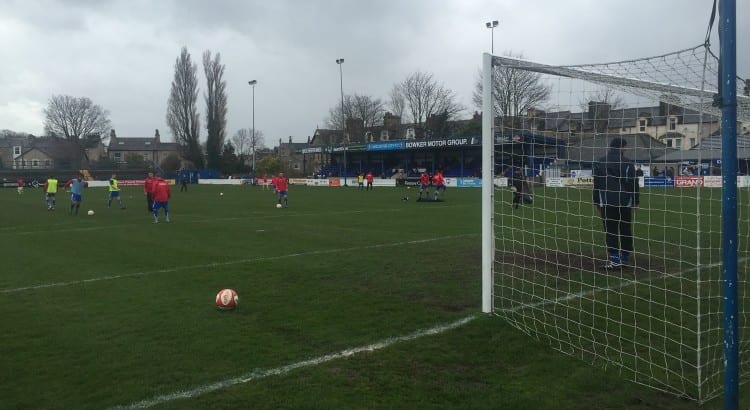 The Giant Axe is the home of Lancaster City FC, based a stone’s throw from Lancaster train station, giving you a sometimes welcome distraction from the action on the pitch.

It’s fairly easy to find via the M6 and then through Lancaster city centre, with a car park that is more than adequate usually for Lancaster home games. There are streets outside the ground where you can park too.

Once in, there are two main turnstiles at either side of the stand you approach, which is behind one of the goals. This is an uncovered concrete terraced stand.

Down one side is an all-seater stand, that includes directors and press seats. It is from here that you get the best view of the passing trains. Opposite that are the dugouts and the “sponsors lounge” which is basically just an elevated mobile building. You can stand along that side and you can also stand behind the goal which is a fully covered small terrace.

Seeking cover is always a good idea at Lancaster, where the wind is regular and the rain usually horizontal.

Adjacent to the main stand is a small clubhouse and a refreshment stall, with the toilets tucked away behind. Service is usually good at Dolly’s, though if it’s bad weather you’ll get drenched waiting for your half time brew / burger.