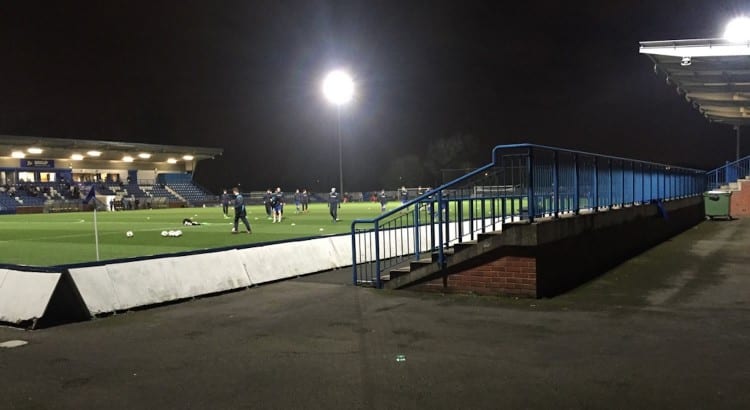 Tameside Stadium is one of my favourite non-league grounds.

Opened in 2005, it is a superb facility. There is a main grandstand which houses the changing rooms, hospitality, a snack bar and an all-seater stand one side of the pitch, with a covered terraced stand on the opposite stand. All the way around the pitch is four or five step terracing with barriers.

Well spaced out, the ground is virtually the perfect template for any aspiring non-league club who wishes to climb the football pyramid.

It is located not far from the M60 motorway and is serviced by a tram stop not far from the ground, which is situated as part of a sports complex which also includes a range of other facilities.

A notable feature at the ground is the statue of the three World Cup winners to hail from Ashton, including Italian international Simone Perrotta.

Parking is no trouble at the ground, though that is perhaps contributed to by the low crowds that the home side attract, which is unfortunate, and perhaps a consequence of the fact that the ground is at the end of a road you would only go down if you were going to the ground itself.

The turnstiles are located in the corners of the ground, and when you enter the closest one to the car park, you are greeted by the Curzon bar, which sits behind the terraced area alongside the main grandstand.

You are able to walk around the whole of the ground, and you have a good view of the pitch which is always in good condition.

The Tameside Stadium was actually my first away trip in non-league football, and it remains one of my favourites to go to.

Curzon have enjoyed successive promotions to get in to National League North, though average attendances haven’t grown massively, perhaps down to the sheer number of teams in the local area.