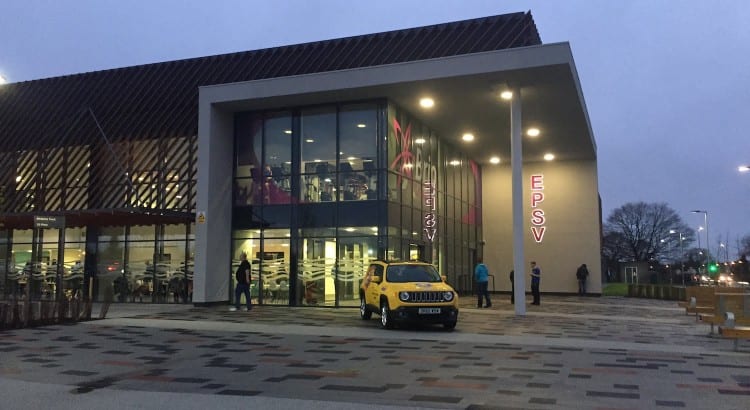 The Phoenix are a community-owned club born out of the ashes of the former Cheshire Jets side. I’m always sceptical of born-again clubs, and particularly those that choose to use the name Phoenix, as I’m not sure it works very well as a sellable brand moving forward.

That said, a new facility could only be a good thing for the club, particularly as I’m told the facilities at their former Northgate home in Chester were not the best.

The good thing about this venue is it is naturally easy to find due its proximity to the well-known Cheshire Oaks shopping outlet, though it was maybe a mile or so further out than I thought it would be.

There is plenty of car parking on-site at EPSV, and the first thing that struck me upon entry was just how busy the facility was for a Sunday evening.

You are of course mingling with people using the other facilities in the building – such as a gym, that is located upstairs.

Due to the number of people, I wasn’t 100% sure where to go once I had entered the building. There was a reception desk for the EPSV, but for match tickets there were separate tables that were manned by Cheshire Phoenix volunteers, all kitted about in branded gear. One thing you can say for Phoenix, perhaps as a consequence of being a community-owned club, is that they aren’t short of volunteers.

Generally, there’s a nice community feel to the venue. I picked up my ticket and was a bit unsure of where to go next, it turns out there are two different entrances to the sports hall which dictate which side of the venue you sit on.

It’s effectively a three court venue, where on Phoenix match days bleachers are pulled out to accommodate fans on either side of the central court. Frustratingly, as at most community indoor venues, there were lines for virtually all sports imaginable, which doesn’t give the greatest impression for professional basketball.

Interestingly, I was told by London Lions owner Vince Macaulay that the new Leicester Riders building has a similar set up, but that their middle court is line free. In my days at Mersey Tigers, we used to use a floor mat to cover the lines on any floor, which of course comes at a cost, but does at least give a more professional image.

The lighting was excellent, the hall had a high ceiling and there were scoreboards at both ends. My first impression was that you were a bit further away from the court than I may have expected, and I was surprised not to see more court side seats.

During the game, a few gym members paused to watch the game from an upper level of the building which I’m sure provided a good alternative view.

Inside the hall was also a merchandise table where the Phoenix were selling branded items. I picked up my mandatory badge and then took a seat.

The seats were your standard bleacher set up, no back rest. Not the most comfortable, but at least fairly easy to get around. There was a fairly sizeable crowd, probably more than I expected, a number of local children blowing vuvuzelas, which wasn’t at all annoying, honest.

It wasn’t the game to get overly excited about, and I would like to re-visit the venue for perhaps a more tense ending, to see how the atmosphere stacks up.

I was expecting fans to be allowed on the court after the game to mix with the players, which I’ve seen happen at Manchester Giants. But no, Phoenix are far more organised than that. Back outside in the corridor there was a bench lined up where fans could queue up, and then 15 minutes or so after full time, the players all come out and sat in a line on the bench to sign merchandise. There’s fan engagement for you (I’ll do a separate blog on that later).

The entrance I entered the building was right by the food stall, which has an “event” menu and a few tables, handy compared to other sports venues, as well as some healthy options (a rarity for the sports follower!).

One positive thing that struck me was the presence that Cheshire Phoenix had at the building, which attracts footfall all week. There was a board with details on the history of the club as well as a list of fixtures. Having a regular home game day (Sunday 5.30pm) is also a big positive – there’s a couple of things that many clubs who play in community facilities don’t necessarily enjoy.

It seems the perfect venue for a community club – now there are limitations with just how far the club could grow at this venue, but certainly from where they are now, targeting a sell out each game is very much feasible.