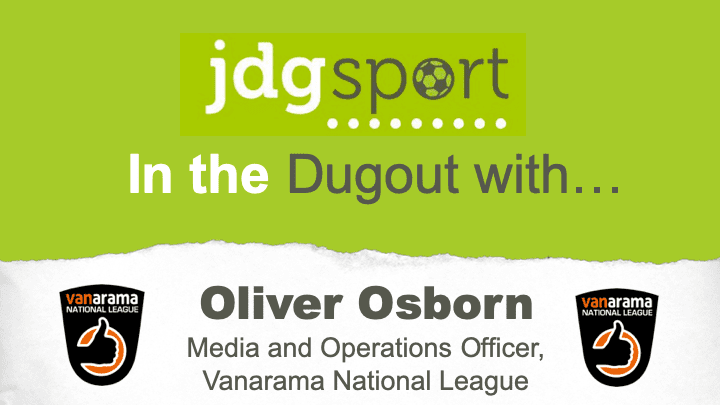 In the Dugout is back! Every week, we will interview someone from the sports media, marketing and social media industry to find out a bit more about them, what they do and their sporting loves.

Today’s guest is Oliver Osborn, Media and Operations Officer for the Vanarama National League. The National League have been very clever in the way they have shifted more towards snappy video content. We spoke to Oliver about the reasons for this, as well as discussing possible plans for the league’s 40th Anniversary, coming up in August.

My earliest memories of sport centre around 2002. Birmingham City- the club I followed on a regular basis as a teenager- were promoted to the Premier League after beating Norwich City in the Play-Off Final in Cardiff. The World Cup in Japan and South Korea soon followed, and an obsession of the game was born!

Since you began working in the industry, how much more of an important tool has social media become?

It’s massive! When I first started finding my way professionally, one or two still seemed to doubt whether it was here for the long-term. I don’t believe anyone holds that opinion now! Even in terms of distribution of news, it has leapfrogged some streams of media that have existed for decades.

How do you try and make your social content stand out in an ever-increasingly crowded football market?

We aim to be the hub for fans of The National League, providing a wide overview of all the latest goings on in the fifth and sixth tiers. And why shouldn’t we? It would be wrong for another website/social media channel to be the go-to place for the best all-round National League news!

The National League website provides a database for users to view all the need-to-know information across the competition, such as fixtures/results and league tables. It’s the only place where supporters can find match highlights from all 34 matches each gameweek, and we offer a healthy volume of written content for those keen to read up on the latest National League news.

One of the biggest changes since I have been involved in media for The National League has been our partnership with Pitchero and OptaPro. As mentioned, we now have a thousands of hours of match footage at our disposal for distribution on the website and social media. This has added a new dimension to match analysis for our Clubs too. Huge credit must go to Videographers at the 68 Clubs as we couldn’t operate to such a huge standard without their support.

This would depend on the brand strategy of the organisation. For less established brands, I would say quantity has the potential to build a brand faster than higher quality social media posts. Organisations with clean branding such as Wimbledon and Olympics are better suited to quality output to correlate with their polished digital appearance.

What has been the hardest thing you’ve had to deal with/cover as part of your role at the National League?

I wouldn’t say there has been a hardest moment. The most demanding, however, has been the two end of season periods I have been involved in. From mid-April to mid-May, the main focus is the permutations of the final matches of The National League season. We then have a very quick fortnight turnaround for the play-off matches across the three divisions.

One thing that is impressive about the National League’s social channels is the use of shorter-length videos. How important has it been having short, snappy stories to engage a modern audience?

French defender @TAudel showed technique attackers would be proud of for @wellingunited on Saturday ?? pic.twitter.com/i33HGoO4bd

Because our audience is wider spread compared to individual Clubs, not all of our content will appeal to every follower of our social media channels. For instance, National League South fans may not be interested in the National League North, and vice versa. What all football fans do love, however, are great goals. Our video content allows us to engage with a higher percentage of our followers, while also reaching new audiences through the sharing/reposting culture of social media.

On Instagram story, we try to provide a matchday experience at the grounds we visit each week. This definitely appeals to those who consider themselves part of the “ground hopping” society within the game.

When you aren’t working, do you have any other sporting passions?

Which do you find gets the most traction – written articles on the website or more video/graphic-led pieces?

I’d lean more towards the video/graphic-led pieces for this one. Our content team at Pitchero do a fantastic job with our website articles. With the crowded nature of social media, the best way to promote the story is in the quality of the social media post, not necessarily the story itself. We’ve got one or two plans for next season in this area, so I look forward to seeing the benefits of those too.

Has there been more of an emphasis this year on increasing the frequency of social media posts, regardless of the channel?

⚽️? Our featured match this afternoon comes from The Laithwaite Community Stadium. There’s a huge top of the table clash in the Vanarama National League South between Woking and Torquay United.

If anything, our output on Twitter has decreased over the past twelve months. We’ve put a higher emphasis on the quality of our posts- including better timings of our clipped videos- but the numbers have still been moving on an upward curve. We’re reaping the benefits from a slight increase in post frequency on Instagram though.

Are there any exciting projects in the works content-wise that fans can look forward to going into next season?

We are hoping to announce plans to celebrate the 40th anniversary of The National League very soon. The first fixtures of the Alliance Premier League took place in August 1979, so we are excited about the prospect of marking the occasion with everyone connected with the fifth and sixth tier.