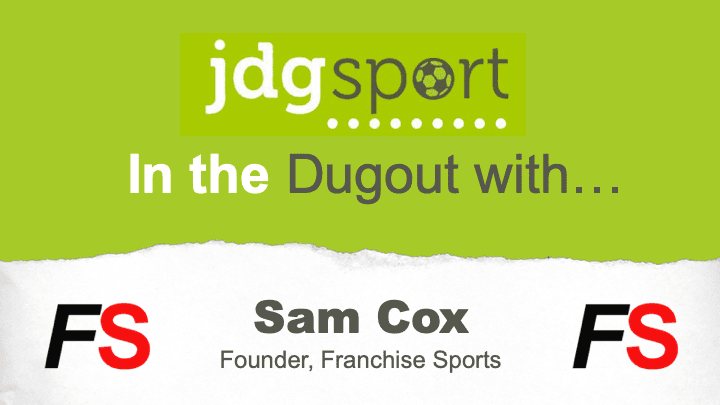 Today’s guest is Sam Cox, founder of Franchise Sports, a website covering US sport, including Major League Baseball, the NBA and NFL, from this side of the Atlantic. Sam saw a niche in the UK sports market and set about trying to exploit it. This links in with the idea of ideas and execution, something which I spoke about in JDG Sport Episode 8 a few weeks ago. He gives some really interesting insight into what it is like setting up a business from scratch.

That’s a tricky one.

There are a few things I ‘remember’, but I’m not sure if I remember them myself or it’s because I’ve rewatched them or been told about it! A standout for me was Mark Butcher scoring 173 in the Ashes in 2001 and of course the Beckham free kick against Greece!

Talk to us a little bit about Franchise Sports?

So, a couple of friends and I had the general idea for an American sports website at the start of 2018.

My brother and I decided to set up the site in March of that year, with Joe doing the website construction and I took on the content side of things, aiming to get regular pieces out on NFL, NBA and MLB initially. We have since had regular NHL roundups and occasional MLS articles too.

What was the initial idea when you came to set up the site – was there a niche in the market that you were looking to exploit?

As fans of American sports, we felt that the British coverage of them is insufficient (and often non-existent).

NFL have played games in London for years, as have the NBA, and MLB is coming over this year. The major outlets will cover big news, but there’s little more than that. Analysis is nowhere to be found. All of the sports are growing in the UK, and the fan bases for NFL and NBA in particular are substantial.

How difficult is it in the early stages of setting up a new website?

It’s challenging, but we certainly enjoyed most of it!

The first few weeks and months were a lot of hard work for not a lot of reward, and it can feel like you’re banging your head against a brick wall. It’s a grind. The satisfaction of the good days is amazing, though, whether it’s an article at the top of Google or positive feedback from readers.

Obviously, everyone knows how important of a tool social media is in the modern age. How important was it for you when you were first trying to secure a following?

Our social media presence is something we really want to work on. At the very start, we were lucky to be helped out by some established accounts, such as By The Minute MLB run by Thomas Frost and a couple of stores specialising in US sports gear.

It definitely helped us get recognised among British US sports fans on Twitter, but our reach is pretty limited at the moment unfortunately.

What was the most rewarding part about setting up a new site – I’m guessing it must have been quite rewarding and generate a real feeling of self-accomplishment?

It’s been great to be able to work on something with my brother, and it’s obviously always nice when people are interested in the site. Building anything up from scratch is satisfying. And, while we’re always looking at ways to improve/grow, I’m really proud of how far we’ve come in little over a year.

There have been challenges and frustrations along the way, but that makes it what it is and hopefully we are producing articles that other people are enjoying.

We try to have a good mix of content. We don’t do too many straight news pieces, mainly because other, bigger outlets have that covered.

News reaction articles tend to be quite popular, where we give a quick overview of a big story with some analysis. Our aim is to get a piece out within hours of news of any trade or free agent signing breaking. The longer pieces are good to have on the site, particularly timeless content. We’ve got a section called ‘flashbacks’ which has some amazing articles in it from past Super Bowls to MLB scandals.

Including video/social media posts, which kind of content do you feel generates the biggest response/reaction?

I’d have to go back to my last answer to answer this one, I think!

Our most ‘successful’ articles tend to have been about player movement. We stay away from the overdone ‘rating’ of trades and signings, but analysis of a move and how it could benefit/harm respective teams tends to draw a lot of readers. Fans always want to read about the newest player!

As mentioned earlier, social media is quiet for us at the moment unfortunately. We have occasionally got a bit of interaction from the sharing of statistics, like a recent tweet about the most popular NBA jerseys in the UK.

A lot of your work focuses on American sports. Which teams do you feel make best use of social media, whether that be NFL, NBA, NHL etc?

I think the NBA are superb. The league just gets it. They don’t clamp down on people sharing clips, which is so important and something other sports could learn from. The teams don’t take themselves too seriously either. Atlanta Hawks have done some really good stuff.

Which American teams do you have a real affiliation to, and why?

A family trip to California in 2015 was when my brother and I first started following baseball as our Dad was living near San Francisco for the summer. He’d been watching a lot of the Giants and went to a few games, so he took us to AT&T Park (now Oracle Park) on our second night there.

We spent the next three weeks watching baseball (mainly the Giants) almost every night – probably more than the rest of our family appreciated – and it just went from there!