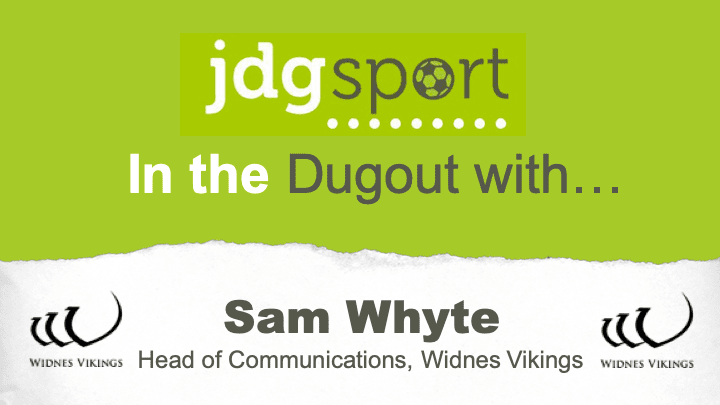 Today’s guest is Sam Whyte, Head of Communications at Widnes Vikings. Since being a part of the media team at the club, Sam has had to work through a number of challenging times, most notably the tragic passing of Kato Ottio in 2018 and the club entering administration and threatened with survival just a few short months ago.

I sat down with Sam to discuss these two pivotal moments in the club’s history, as well as how the club are using their social media and marketing strategy to reconnect with their fanbase as the club begins a new chapter in their history.

If you want to be featured, drop us an email at hello@jdgsport.com.

What was it that made you first get into rugby league?

I’m from Wigan, and with a huge family who have watched rugby league for decades on end, I didn’t really have a choice in the matter! Up until the 2017 season, I was a season ticket holder at Wigan Warriors since the early 2000s, going home and away every year. I first started going to games regularly during the Mike Gregory era, and I haven’t looked back since.

Since you began working in this industry, how much more of an important tool has social media become?

It’s incredibly important, and I think some people underestimate the value in it to be honest. Almost everybody has a phone, a tablet/iPad, or a way of accessing social media these days, and it’s the easiest way to convey a message as quick as possible.

The beauty of social media is your at the hands of your supporters within a click of a button. Whether you want to push ticket messages, make a club statement or interact and engage with people, social media makes that incredibly easy. I can only speak from my experience at Widnes, but social media during the 2019 season for us has been vital in building the excitement and rapport we have with our fans this year.

In a world where more clubs are trying to compete to get fans through the doors, what do you as a club do to make your content stand out?

We have made a conscious effort since the start of the year, and credit has to go to Phil Finney for sitting down with myself and us both talking through how we wanted to do things this season from a media perspective.

After hearing him speak, a Widnes lad at heart, we came to the conclusion that we wanted the Widnes of old back, and wanted to be a club that doesn’t takes itself too seriously. We want to be the club that has a bit of fun with their content, and kind of be the ‘community club’ we wanted to be all those years ago. In previous years, we’ve probably tried to do too much the other way, so it’s been nice to see the positive response from the fans in what we’ve been doing.

100% quality, but consistency of the content you’ve got and the implementing of your strategy is just as important too. We’ve probably been guilty in the last couple of years of doing quantity over quality, and that’s a lesson learnt for myself when I first started out in the job. I think we’re finding the right balance about now, and it’s probably the best we’ve had it in the three years I’ve worked for Widnes.

What has been the hardest thing you’ve had to deal with/cover as part of your role at the Vikings?

There’s two moments at Widnes. The first was the passing of Kato Ottio, just days before he was due to arrive with us from Papua New Guinea as a new signing. Luckily, I had a manager above me at the time, John Hughes, who was brilliant throughout it and guided me through it, but it was tough few days. We dedicated our friendly against Whitehaven to Kato in the week that he passed, and John was away on a pre-booked holiday, and I’ve never felt as much pressure in my life to deliver what we said we was going to do. Luckily, it went as planned and it was a fitting tribute to Kato.

The second was the recent administration, and I’ve said this already elsewhere, but it was the also the most rewarding experience of my life.

A huge talking point in recent weeks has been the Vikings managing to save themselves from the threat of extinction. How surreal was that to be a part of?

Incredibly surreal. It all happened so fast, we weren’t paid as staff on the Thursday, went into administration on the Friday, and then was given the green light to fundraise on the Saturday. As said above, I’m a Wiganer. So in those days of administration, to see so many people I work alongside everyday so emotional and so driven to keep the club they have grown up with alive only inspired me to fight just as hard.

That Sunday of the administration week is a day I’ll never forget. I was having to fight my way into the office because there was so many people, (staff, players, ex-players, legends, fans), all there offering their support. It was hard not to be inspired and motivated by the wave of support from the town, even if it meant all of the staff were getting into work at 7/8am, and leaving 15 hours later. Showcasing the community spirit that Widnes and the town had during those days is one of the highlights of my albeit short career so far.

In a weird way, it’s probably been a good thing for the club that it happened. People realised what the club meant to them, and the town, and there is a real galvanised feeling about the place. Like we’re actually all in this together. It makes my job easy! It’s definitely something I never want to experience again, but it’s something that I’m immensely proud of. Knowing that I have played a small part in keeping Widnes Vikings alive.

You produce a lot of superb graphic-led and video content on a regular basis. Do you think that this is the best way to get crowds engaged and interested in coming down to games?

Without doubt. Everything you see now is graphic-led, and if you aren’t doing the same, whether it’s news, tickets, interviews etc, you’ll get swallowed up by the rest. The fun aspect to our strategy that we incorporated at the start of the year was to enthuse and engage a fan base that had felt alienated and distant in previous years, and the effect we’ve seen in the last few months has been really positive.

Given what went on last season with the club getting relegated, how have you used social media to restore the feel-good factor around the Town?

A change of tact to be short.

I’ve said already that we’ve tried to have a bit of difference to our content this year, and touch wood, it’s working. For example, the fact that 17 of the first team squad are Academy graduates was one of the ways in building a connection with the club’s supporters and the team. Successful Widnes teams from yesteryear have been based around home grown talent, and that was one of the angles that we’ve tried to highlight so far this year. Graphics, focus interviews have been two simple ways of enforcing that.

Granted, things are always easier when you have a winning team on the field, which we haven’t really had for 2/3 years and always make fans more receptive to what we’re trying to do!

We’ve seen a lot of fan engagement between Widnes and supporters this year on social media. Has that helped with building relationships with supporters and encouraging more of them through the turnstiles?

I hope that’s the case, and if people coming through the turnstiles comes on the back of it, then great. We knew fan engagement was an area that needed to be improved, and we’re working towards that. Fan groups have become back involved with us, and we’ve tried our best to ensure the fans are listened to, rather than just being told who, what, where etc, which is something we may have got wrong in the last couple of years.

Do you think that through the use of social media, the fans perhaps feel more of a part of the club following their survival in the last few weeks?

Yes, all you need to do is take a look at the #WeSavedOurClub hashtag we started on Twitter post-administration to see the effect it has had and how they feel a part of it. This club is literally nothing now without their support, so it’s vital that we treat them as they deserve and move forward as one.