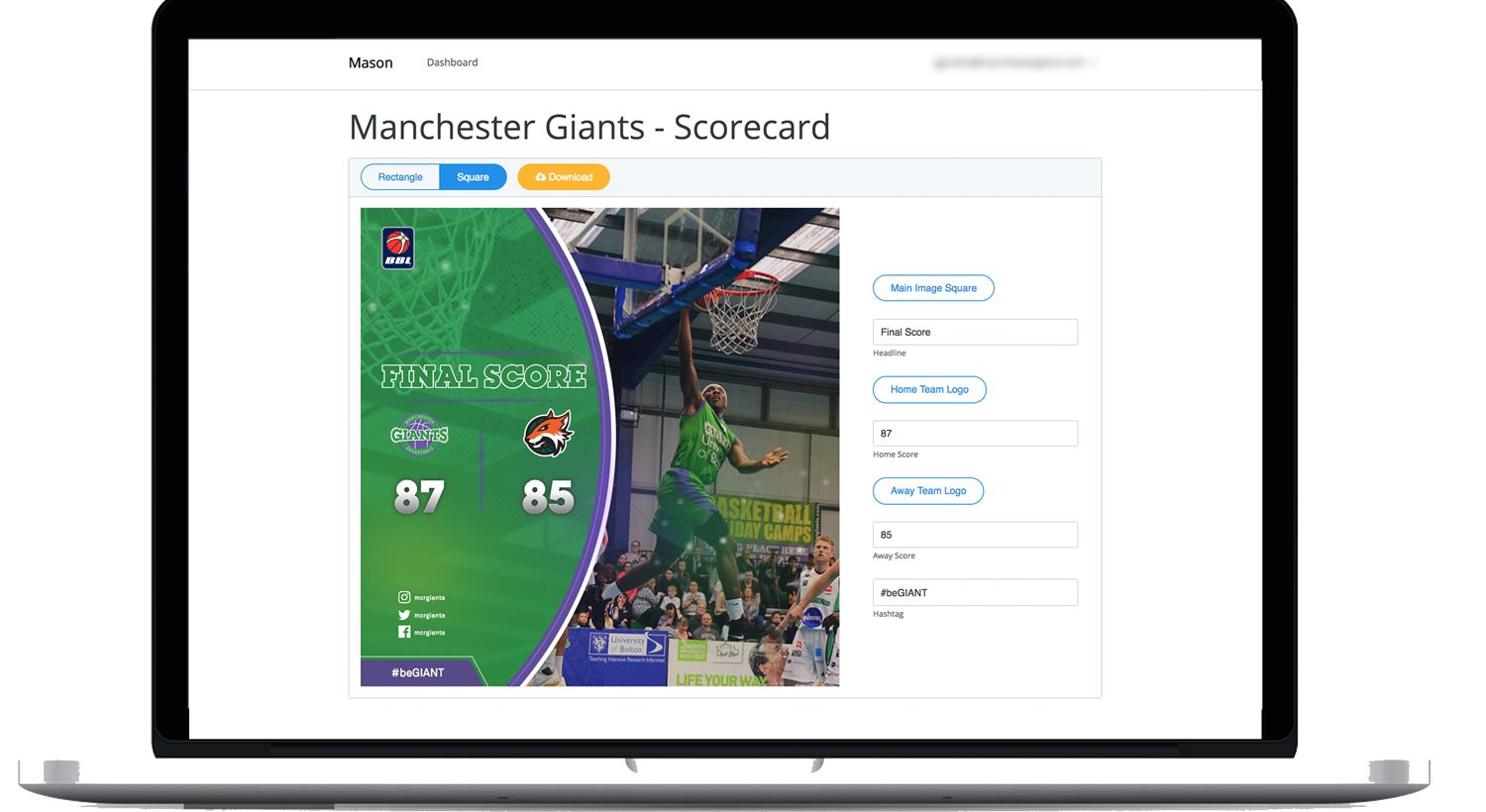 As the digital and sporting world collides and expands, it can become increasingly difficult to keep up with those raising the bar of innovation.

Big Premier League clubs and US franchises have seemingly endless resource to throw at social media, video production and various other things.

At the lower end of the food chain, there are clubs operating with volunteers doing the same role or even one person having to spread their skills over a wide number of task (yes, that’s me).

That’s why digital sport tools like Mason are so useful.

Mason is the brainchild of Sam Neter, the man behind top basketball website Hoopsfix and creative digital basketball agency Cut The Net.

It enables the creation of graphics – for social media or even website usage – without the need for Photoshop, similar software or design and technical knowledge.

Instead, after you’ve got your initial templates designed, you can manage the update of the content within them – including text and imagery – via an easy-to-use admin interface which basically anybody in your club can get the hang of.

It’s ideal for things like score updates, starting line-ups and quote based graphics.

Sam said: “There’s a definite need for it. We’re in an age where digital outputs are everything and it just doesn’t look very good when clubs do not have professional graphics.

“We started off doing Photoshop templates for clients. They’d start off dead enthusiastic, but then problems arose when: 1) they’d have to have Photoshop, 2) they’d need to know how to use Photoshop. It was too easy to mess up with all the layers and options, so subsequently became too much hassle and they wouldn’t be used.

Been working on the basic Mason marketing site today – am feeling the green/yellow colour scheme…still don't have a logo/brand sorted for it; thinking this is the direction we're gonna go colours wise. What do you think? ?? pic.twitter.com/mZ5DmCQqVT

“We spoke to a few teams about whether they would be interested in something like Mason and managed to take a down-payment from six early adopters to validate people were willing to pay for it.

“There are a few other other tools out there that do a similar sort of thing, but are targeted more at the super-high end of the market and their prices are just not feasible for the sort of clubs who need this the most.

“So we want to become a slightly more affordable option and in the long-term, a more feature-rich platform.

“It is born out of our own and our client needs, so I feel we have a deep understanding of the problem and how to solve it.”

An all-round team performance as Giants lead from start to finish to claim a big win and the head-to-head against Leeds in front of a packed house live on @BBCSport#beGIANT #BritishBasketball pic.twitter.com/E6UyHOwIcR

They are currently speaking to international federations around the world to make the platform available.

Whilst the product remains in this early development stage, Neter has a desire to work as closely as possible with early customers, to react and develop in response to their feedback – something which Giants have already made usage of through myself.

Find out more about Mason at Mason.ai, where you can request access to become an early adopter of the product.