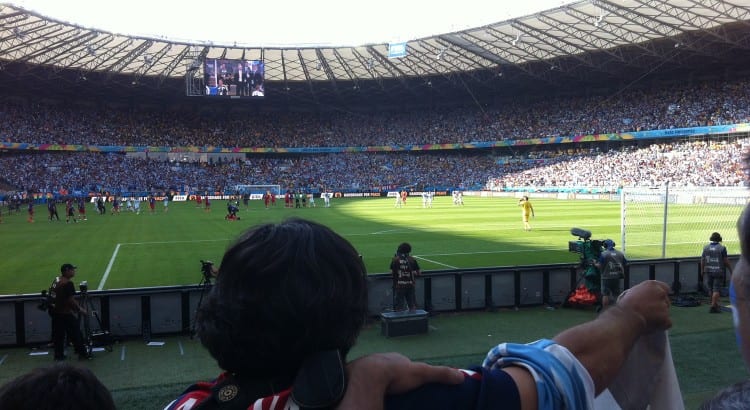 This year saw me witness two things I never even dreamed of – a FIFA World Cup live and my hometown club, Warrington Town, in the FA Cup proper.

I’m sure there are many football fans who joke with their mates whenever England qualify that they should go to the tournament and follow them. This time, we pushed for it and in June, me and my mate Jonny made it to Brazil for the World Cup. We took in four games – Argentina v Iran, England v Costa Rica, Portugal v Ghana and Argentina v Switzerland – and it was an incredible experience. Just a shame England were knocked out before we’d seen a ball kicked!

The dream of any lower non-league club is to reach the FA Cup first round proper. In truth, it was what first attracted me to watch my hometown club some seven or eight years ago (my first game was an FA Cup qualifying round tie against Stalybridge). There’s far too much to remember about the Warrington FA Cup run in this entry, but the night that will stay with me for the rest of my life was the 1-0 win over League Two side Exeter in front of the BBC TV cameras in the FA Cup first round. Never in my wildest dreams did I think it would ever happen, and for it to do so in front of a sell-out crowd, with the television cameras present and with the whole town buzzing was an incredible feeling.

Watching Widnes in Hull since their return to Super League has been painful to say the least. In fact, going to Hull when Widnes were last in Super League and against Hull KR in the Championship hasn’t been much better. That all changed this year, as Widnes recorded wins away at both clubs. Both games will be remembered, but the win at the KC Stadium will stick in the memory for some time. Widnes took the lead in the first minute, as Patrick Ah Van slid in for a try, and that turned out to be the only try of the game. Tom Gilmore notched a penalty and then a drop goal, as Widnes somehow stood firm for the whole game. Wasn’t a great game for the purists, but it was just such an unusual and bizarre experience, almost thoroughly exhilarating.

After you’ve seen as much live sport as me, it’s always a pleasure to be sat there and think “I’ve never seen that before”. That’s exactly what happened when I attended the Championship One Grand Final at Headingley between Hunslet Hawks and Oldham, which was decided in golden point extra time. Former Widnes player Thomas Coyle struck the winning drop goal, to earn the Hawks promotion with a 17-16 victory after what was a thoroughly entertaining game and one of the highlights of the rugby league year for me.

5. The home of football

The aforementioned FA Cup run took me to the home of football and the world’s oldest club, Sheffield FC. Having hot-footed it straight from the office, I arrived at the ground with it in complete darkness, due to floodlight failure. Fortunately, the drive wasn’t in vain, the lights eventually made it on, and Warrington Town went on to win to make it through to the third qualifying round. And the rest, as they say, is history.