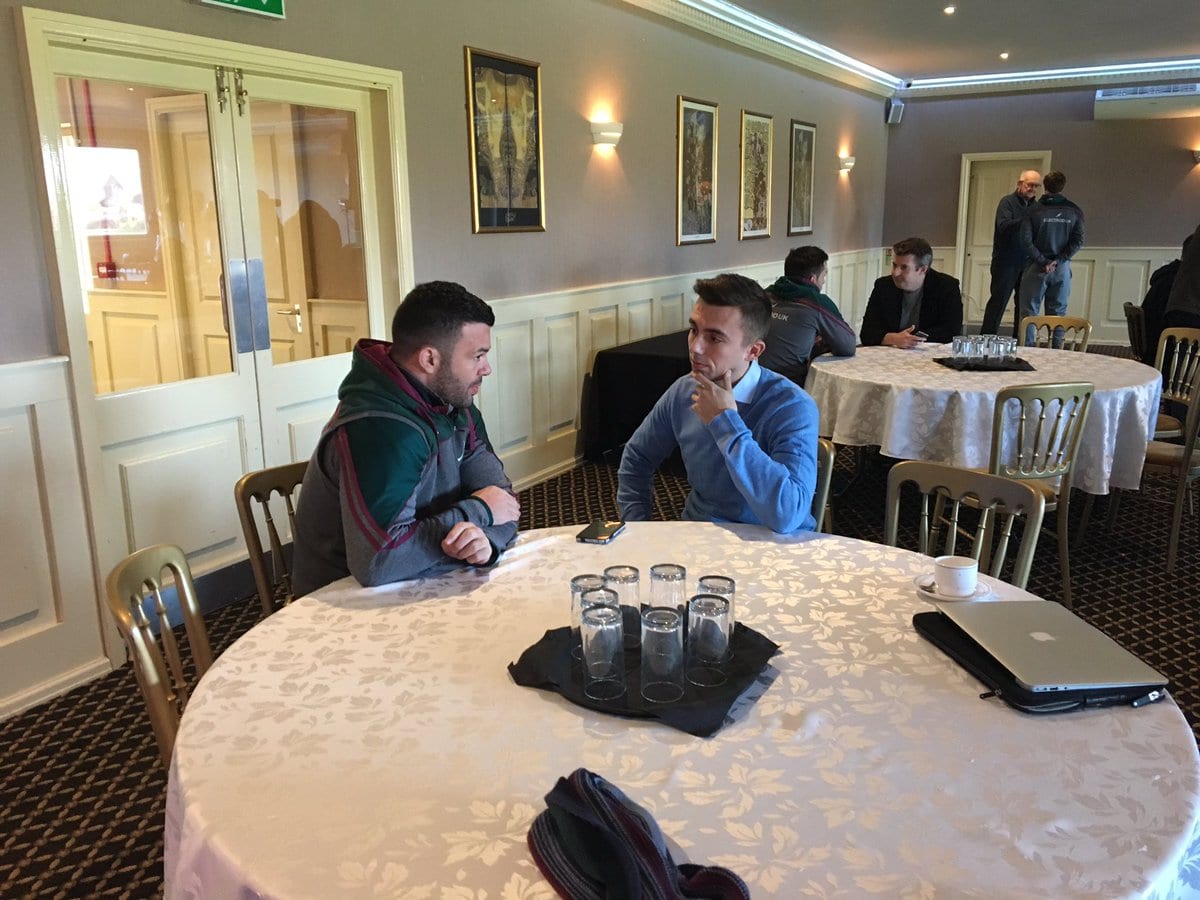 Ever wondered what the state of play is at a media day for a Super League club?

I recently attended events for Salford Red Devils and the Widnes Vikings and thought it might be good to give an insight into what goes on.

Ahead of the Salford press day journalists attending needed to email the club with player requests.

This has been the case for the other press days which I’ve attended on behalf of Love Rugby League and it’s a good way of avoiding a frenzy on the day.

Once we arrived in one of the club’s meeting rooms we had to wait a short while before the first players we wanted to speak to were brought through.

As well as audio interviews my colleague and editor John Davidson also did a video interview with Kris Brining which ensured there was a bit of variety when it came to the content produced.

There was also a sponsor board set up at the end of the room with the Salford Red Devils brand on which offered a good background for video interviews.

Most of the other journalists from organizations such as the Press Association and the Sun newspaper were only doing audio interviews. This might mean the final content they put out is not that interactive.

After the press day had finished we did a Facebook Live rounding up key events from the day which was a fresh approach to sharing news with people that follow the page.

It is also a great way of increasing engagement because people can comment and also rate the content.

Super League were the only other organization to share content in this way – they decided to sit two Salford players down and let the public ask them questions.

This is another good way of increasing engagement and driving traffic which could be something loverugbyleague look to do in the future.

When it came to the Widnes media day there seemed to be slightly less organization because it was advertised as a 12.00pm start, but the players had some lunch first so it meant waiting around for a bit.

When they had finished it was left to the journalists to be able to recognise them and for some of the younger players that proved a bit tricky.

It might have been better to sit players down behind a table with their name on it so that everything was more organised.

In terms of the content people were producing, John filmed another video interview with one of Widnes’ new signings Tom Armstrong.

Again it is a different way of doing things and may help to attract viewers who don’t want to read text.

One of the good things about the Widnes event was the venue. It was held at the Parklands Club which had numerous round tables and chairs.

When you did want to interview a player it was easy to make them feel at ease by offering them a seat and so they are likely to engage more about various subjects.

With both media days the journalists had to do a group interview with the managers, meaning there was no chance of breaking any exclusive news.

This is the case with a variety of sports and although everybody’s content can end up being similar it is a good way to make sure things run efficiently on the day.

One of the key things to take from this article is the change in the way content is being shared and consumed.

Facebook Live, which launched last April, is just one example of this constantly changing media landscape and is a definitive indicator for how things will develop in the future.