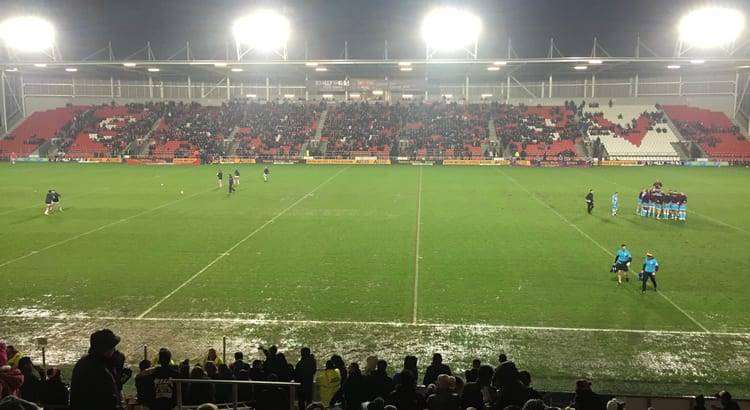 What a treat it is to have three NRL clubs on these shores for the second successive season.

After the Super League fall out of the late 90s, it has taken more than a decade to persuade our friends from Down Under that the World Club Challenge is worthy of their full attention, even if Saints fans perhaps would have preferred a half hearted South Sydney Rabbitohs performance than the virtually flawless one that they saw their side succumb to last year.

Though billed as the World Club Series, where the NRL or Super League as a collective will come out as a winner over the three-game weekend, in reality it is still the match-up between the league’s respective champions – this year Leeds and North Queensland – that takes any real significance from a club perspective.

But despite that, this format is a real positive step in the right direction for the world domestic game, arguably just as important as the growth of international rugby league.

It will be a long time until we will see a truly integrated World Club Series – having both hemispheres playing to the same rule book would be a start – but it can only be encouraging that the Australian sides have committed to coming over again.

Fitting an expanded, more competitive multi-team series in to the calendar is going to be the biggest obstacle in taking the series forward in future.

The Super League season has recently extended to 30 regular season games (including the Super 8s) plus the potential play-off semi-final and the Grand Final, as well as the Challenge Cup.

In the NRL, there is the State of Origin series.

And of course, we’re having enough of a battle tempting Australia to play international rugby league as it is, even when it is constrained to the autumn months post-Grand Final.

Another challenge is how the world club series can be accommodated in a fashion that it doesn’t de-value or detract attention away from the respective Grand Finals.

Would the ultimate dream be to see the top eight of Super League play against their NRL counterparts rather than go through the Super 8s phase?

Or would a better method be to take the top two Super League clubs out of the Super 8s (sic) phase and have them play in a four team round robin with their NRL equivalents?

There aren’t any clear suggestions that can be accommodated logistically.

There’s also the worry about making things stale. Catalans were refused a friendly against Sydney Roosters, presumably to avoid detracting from this very game.

Perhaps holding the series in the different hemispheres in alternative years would prevent things going stale for fans.

Being under 30, I don’t remember the days of touring teams, of course made possible by the contrasting seasons. We had a reminder of how special they could be with New Zealand’s visit to Headingley at the end of last season.

For any sport to get global attention, its best players need to be going head to head. As a fan first and foremost, being able to see the likes of Jonathan Thurston playing for his club team is a huge draw.

For now, it seems that these three stand alone games are the best we’re going to get. Whether the UK teams get to make the trip to Australia next season remains to be seen.

After both Leeds and Saints were thumped last weekend, and Wigan stuttering to a late victory over injury-hit Huddersfield, questions were raised about the potential distraction of the World Club Series, held just two games in to the season.

While possibly unfair on Widnes and Salford, both tremendous in their respective victories, it does seem to be odd not only for the teams involved, but for the five Super League teams without games this weekend having only just gone through a pre-season campaign and played two league games.

You feel that Super League needs to see one win this year to prove that the current format has legs.