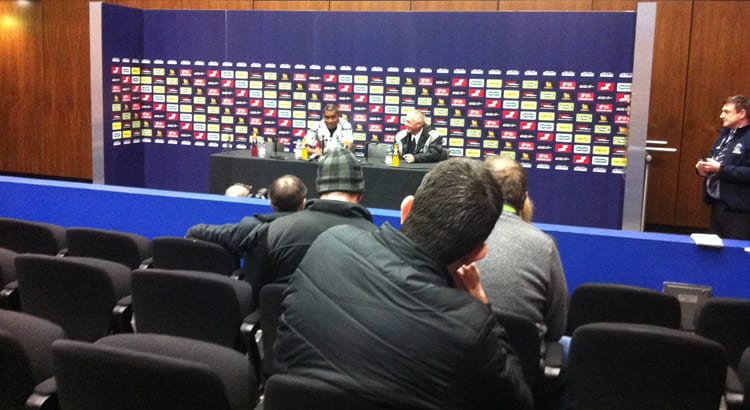 There’s been a storm brewing over press conferences in rugby league for a while.

Following the opening game of the Super League season on Thursday night, St Helens issued a statement saying that live streaming and Periscoping of their press conferences is not permitted, ahead of their own opener at home to Huddersfield.

The press conference is a long standing journalism tradition, an opportunity for hacks to ask questions and generate stories in a format that pre-dates the technological advances of recent times.

It’s not just live streaming of press conferences that is causing issues – it’s the recording of them in full on audio or video and then sharing shortly afterwards, be it through an official club channel or otherwise.

From the one side, it’s going to be incredibly hard for a newspaper journalist to get his story in a paper tomorrow or later in the week if the quotes gained from a question that he has asked have already been published be it through a live stream or the official club channels.

But on the other hand, why shouldn’t fans be able to gain an insight in to these press conferences if the facilities are there? Ultimately, the press is merely the gatekeeper for information inside the club that fans don’t typically have access to.

The problem is, journalists have got to make a living. If you’re a freelancer who is reliant on a commissioned story to be paid, you’re going to be pretty sick if your only real access to a club week-in week-out is hijacked by a live stream or a recording.

As an online journalist, I’ve even been asked if I wouldn’t mind holding a story back for a few days so that a newspaper journalist could get his story in print on the Saturday. I respected this request, out of my respect for the journalist in question, but I could quite easily have said no – especially when you consider that this story would have got considerable hits to Love Rugby League, which is essentially the bottom line when it comes to me making the site sustainable (or trying to!).

If either of the above went the other way, that journalist may then stop bothering attending the press conferences. If it then becomes the case of being a club controlled event, then club’s will have the ability to set their own agendas, and there won’t be any independent press able to ask awkward questions or find the answers to issues that people want to hear.

However, let’s be realistic. Newspaper journalism is dying. Sad but true. My experience is that there are only usually a handful of press at most press conferences, and generally broadcast journalists do their own separate interviews anyway.

With media training developing all the time, coaches and players are getting more and more guarded in what they say and what they answer in public. I’ve been in press conferences where a coach has said one thing on tape and then said the complete opposite off the record.

For clubs, like Saints, that enjoy an extremely good relationship with their local newspaper and perhaps club’s like them who are at least partially reliant on that coverage, keeping their traditional hacks happy remains a priority – and rightly so.

Whether that changes moving forward, is another matter. Maybe it’s just a case of rugby league media not being as sustainable as it should be. There are no problems, for example, with live streaming Premier League football press conferences live on Sky Sports News. That said, the formats of some football club’s press conferences go in a different manner, where broadcast and print journalists are split up (with the former being streamed live).

It should be noted that the offer is there from Saints to live stream interviews separate to the press conference.

You can’t blame those reliant on press conferences being defensive about their direction. Rugby league journalism is certainly a shaky profession at best.

Is there a time to admit that it simply just isn’t sustainable via traditional means, and that press conferences should be opened up to a wider audience?

It’s a debate that will continue on. The more talking points that can be generated, be it via coaches, players or otherwise, can only be good for the growth of the game.

@Chrisirvine @therealsteavis @Saints1890 Surely all more reason to then? If ‘traditional’ media isn’t the strong point, go direct to fans