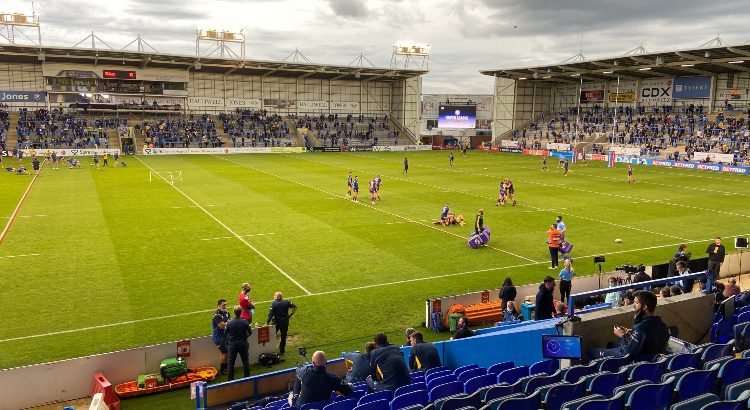 There are benefits to working in an area that you enjoy. Covering sport is all I wanted to do. The insights it provides and the experience it has given me, I would never want to replace.

It also builds frustration – because you see day-to-day issues that perhaps others don’t think about. While much of my work revolves around media and digital marketing at present, it remains an ambition to become a sports administrator and be able to put in to practice the experience, knowledge and passion I have from all sides of the game – as a fan first, expert second and professional always!

For context, I am fiercely passionate about rugby league. It is part of who I am. For the past 15 years, I have run a rugby league website which started off as a hobby and turned in to my full-time job. More importantly, it is part of the fabric of where I am from. There are, sadly, very few places in the world where rugby league is so crucial to its local community. An important part of my life was attending games with my dad and my sister. Even after starting a career in sport, I never stopped following my team as a fan. While I probably prefer football, I care more about rugby league, although that stance is continually being tested!

One of rugby league’s big problems is with data.

It is remarkably sparse. For a sport that barely has any games as it is, getting access to any sort of information is difficult.

When even the official governing body can’t be bothered getting it right, then what hope of persuading anybody else? Here is the current “player stats” page for the Championship; the second tier of rugby league in the UK.

This is basic data that should be easily manipulated and displayed by the governing body.

If anything, given everything is now processed online anyway, this sort of data should be available for every rugby league match in the country – right down to grassroots level. That’s just the basics, like line-ups and scorers; which can then be manipulated to create top try scorer charts, for example.

There is no excuse for it not to be – especially when you compare to basketball, where you can find an astonishing amount of data for even junior matches.

At present, only Super League matches are covered by OPTA stats. Even that data you have to wait for. Coaches in the Championship have to manually log things like metres made, tackles etc themselves. Surely in this day and age, rugby league should be investing in something that enables all of its semi-professional clubs the ability to have data of this quality; without them having to waste valuable time doing it manually a couple of days after a game.

It would create endless potential for data – for coaches, scouting, recruitment, player development. A colleague in basketball can do this to the nth degree thanks to the availability of basic match data.

🏀📈 Hours of data prep this weekend & I have an exciting new dataset to play with. 182 new variables, tens & tens of thousands of data points, lots of new knowledge to be created and/or refined. Post-recruitment season projects.

These issues with data aren’t a new thing. I’ve been banging the drum on this for years. Ever since I saw a tweet from a Bradford reporter congratulating Danny Hulme for scoring eight tries in a match for Toulouse. Of course, he hadn’t – it was just the live centre data was incorrect.

If I monitored every inaccuracy in try scorers over the years, then I’d have a very long list. And that shouldn’t be acceptable.

Here’s one from a leading Super League club website recently.

I know rugby league has a lot of issues at the moment, but it has had major data issues for several years now. Don't know any other pro sport like it. This from the official Warrington website just now, their match centre from tonight's game. Certainly not exclusive to them. pic.twitter.com/CHTDp5jqvR

Some non-Super League clubs have websites provided by the RFL’s partner. That means they have the benefit of league tables and fixtures being fed through.

The problem is, that’s not always plain sailing either. Duplication of data is common. Here’s the Rochdale website fixture page:

You might call me pedantic for the above, but the next two examples should surely be basic requirements.

First of all, on the official RFL website, the Championship league table doesn’t even show the points percentage and points scored percentage columns which is effectively what determines the table order this year:

Second of all, head to the Super League page, and apparently there are no fixtures upcoming (there are two tomorrow, if you want to take advantage of these signup offers and have a flutter).

While these are probably system related, they should be sorted. It’s not a great look for any fan, new or old, wanting to find up to date and relevant information on the game, for which the RFL website is likely a first port of call.

Virtually all rugby league sites have been controlled centrally by the same agency for at least the last decade. This included the Championship club websites, which while they were a good idea to provide central control, was never executed properly from a content point of view.

The barrier to entry

The RFL recently advertised this role:

Similar roles are also being advertised at Warrington and Wigan (competitive salary, which normally means as low as they can get away with paying).

In my opinion, the salary for the roles are driven by the competitiveness of the sports industry and the vast number of people wanting to be in it. They will get a junior member of staff. For anyone with adult life costs or any experience, that job is simply not suitable.

The issue for me is that you rarely, if at all, see any mid-level or senior posts advertised; to attract people to work for the sport who have say a decades worth of experience in their field.

I'd love to work for the RFL. I have 15 plus years experience in media and comms incl campaign delivery, crisis comms, press mgt, media training, event mgt as well as graphic design and website development. But for £21k a year? You get what you pay for. https://t.co/8iAfoGdWjk

What this has created is a ‘yes’ culture. There are some great people working in rugby league, but they are either led by people out of touch, or don’t have the resource around them to drive forward, instead relying on junior staff to just ‘do’.

One of my good friends worked at the rfl, a few years ago, @getpromotionpr, and wrote this piece after his time there. cant see that things have improvedhttps://t.co/v8PfF3rZVM

I’ve had experience of that first hand. The season after Ryan Hall scored a dramatic try to win the league leaders’ shield, the Super League promo video inexplicably didn’t include it. In response to someone else on twitter, I called it “shit”. I was contracting for Widnes at the time, and then Super League chief Blake Solly decided to call James Rule about my tweet (despite the fact Solly followed me and had my number). Both were then worried that me challenging what was happening would effect both their egos, and therefore I stopped working at Widnes. Given what happened in the subsequent years, perhaps it was a fortunate escape.

It baffles me that anyone can work in sports marketing or administration and not understand that the Hall try should have been plastered everywhere to promote the game.

Decent people should be trusted to make decisions and calls as part of their role of expertise. Not to just say ‘yes’ to the same tired old decision makers.

I struggle to remember the last rugby league game I went to that kicked off at the advertised time. TV games regularly start up to 10 minutes late. Sometimes you can understand that, but there’s no way that a non-televised game should be starting seven minutes after 3pm.

Where is the pride and professionalism?

Likewise, errors like this by the BBC – yes the game was re-arranged at short notice, but this programme was televised three days after the event (don’t get me started on that one!), and plenty of time to correct.

I have often thought that the RFL should be more pro-active in dealing with inaccuracies – so if fans are tweeting about something that is blatantly incorrect, then engage with them and point them in the direction of the facts.

The recent controversy over adding a registration fee for the community game simmered down after there was some clear and sensible discussions, even if people still don’t agree with it.

Unfortunately for rugby league, its fans, broadcast and commercial partners and professionals are being turned off by a combination of a lot of little things that could be sorted with having the right people, in the right places.