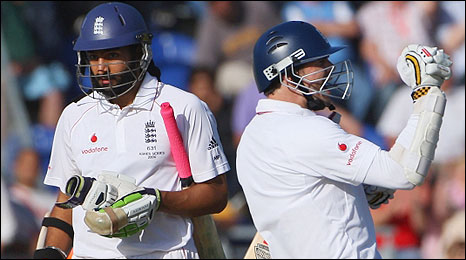 I see England somehow salvaged a draw in the first Ashes test against Australia.

I say see, I didn’t, thanks to the fact that Sky Sports has the rights to all the cricket these days, and they have done ever since that fantastic Ashes triumph in 2005 that gripped the nation and apparently meant cricket was threatening football as the national sport (what happened to that by the way?).

Despite it not being on terrestrial, it’s good to see the BBC wasting plenty of taxpayers money on fancy interactive scorecards via Freeview that no one actually cares about – or rather they can get it online or via teletext. It meant we were denied some half-interesting coverage of the German Grand Prix (which incidently, I watched on the internet anyway).

But what grinds me is the fact we are losing tradition.

Imagine England playing a quarter final in the 2018 World Cup at Leicester. It wouldn’t happen. That’s no disrespect to Leicester, but it would be at Wembley, no questions asked.

And what’s with these Wednesday starts? What was wrong with Thursday?

Thursday’s used to set up a fascinating Monday, because games were often still on a knife edge and it meant cricket was the centre of attention on the final day. It gets lost in the news on Sunday evenings mainly because no ones watching it, but also because it acts as a round-up as to what’s happened over the weekend.

Wednesday to Sunday isn’t right. Thursday to Monday is. It’s better for the punters and the ECB too. The most popular days will be Saturday and Sunday, but by finishing a test on the Sunday, the ECB are in danger of having to refund fans if a test finishes early – likewise, people might not gamble on getting Sunday tickets for that very reason.