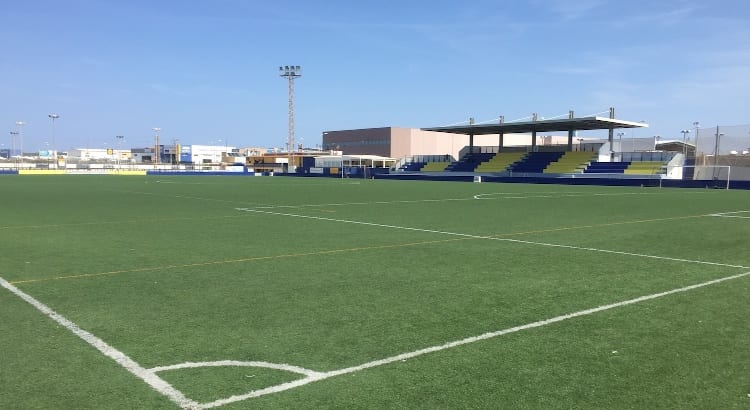 The past year has enabled me to spend a little more time on some side projects, like Menorca Football.

Menorca is somewhere I’ve been on holiday numerous times throughout my life, and during some down time travelling to cover a game back in 2019, I started to look deeper in to activity on the island.

I was aware of one club, Sporting Mahones, who had played in the third tier and who I’d seen on Football Manager; and with the presence of Real Mallorca in the top leagues from the neighbouring island, I always wondered whether a Menorcan club could make it up there too.

Got to find one of these kits somewhere! Sporting Mahones from 2009/10 season.

Digging deeper, and making good use of Google’s translate facility, and I uncovered a hell of a lot more.

With a population of around 90,000, the island of Menorca is basically half the size of the population of my hometown Warrington, where the football team commands around 500 average attendance.

The regional Menorca league now has 12 teams, all playing at their own facilities, which seems an astonishing amount.

When your work and hobbies collide as mine do, a project like this sounds like work but really isn’t.

Following the piece on @estadios_Spain, I've had a look at what's happened over the past decade at Estadio Bintaufa, home of the defunct Sporting Mahones and now Sporting Mahon.

The increased downtime due to lockdown has enabled me to explore Menorcan football a bit more, and the site has now got 90 articles – ranging from round-ups and news of current action, to looking at historical events and the grounds on the island.

It has opened up some fascinating stories – such as merging the island’s biggest two clubs to try and create a “super club” which backfired and meant there were three clubs; the Menorcan goalkeeper that won the European Cup with Real Madrid; and the woes of promotion and relegation to the national divisions.