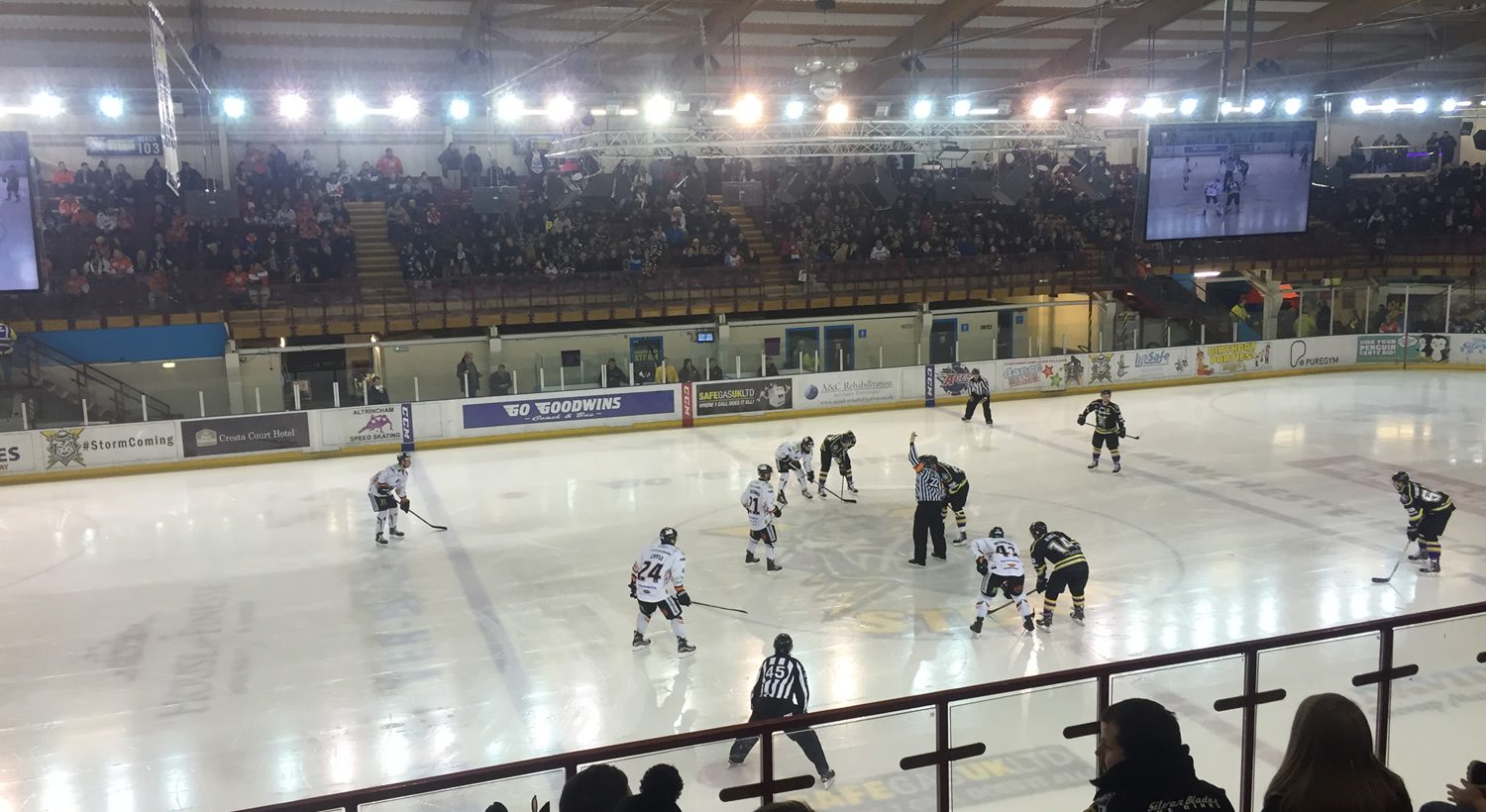 However, it now appears to be staying on a permanent basis, albeit with some development itself. The rink structure is effectively a flat-pack, and was constructed in Finland.

It is very well located, right next to Altrincham bus and train stations, which also services the Metrolink into Manchester. There is also a fairly sizeable car park right next to the rink, and ample street parking across the road.

There are two entrances to the rink – one for guests and season ticket holders, and one for paying on the gate (on the right). The fee for adults these days is £15 (although you can save £1 by booking in advance). It can get congested close to face-off so far, simply because they often only have one of the two windows open for purchasing tickets.

Inside the rink, there are 2000 seats – elevated above the ice in a horseshoe shape. I like sitting behind the goal at hockey, but was put off by the netting that’s in place to protect you from the puck. It’s something that differs person to person – but I can’t cope with it for the full game!

The sight lines aren’t the best at the Ice Dome. One side of the horseshoe hangs over the ice slightly, meaning you can’t see about a third of one side of the ice, although you can at least see both the goals.

There are plasma screens in place at the bottom of every block, although ice hockey isn’t the greatest sport to follow on TV!

On one side of the rink, there is a refreshments stand, which offers plenty of hot food choice. There are also vending machines for drinks and snacks.

I tend to sit in block 16, with away fans usually reserved block 17. I find this gives me a good vantage point between the home and away fans.

Over the years, have seen plenty of dramas at the Ice Dome. One of my first games was delayed considerably by a power cut at the end of the first period. I’ve seen a game finished early and decided by a penalty shoot-out due to poor ice quality, and puddles of water have often caused delays at games following the use of the Zamboni in period breaks.

I was present at the Ice Dome’s first ever sell out, for a play-off match against Sheffield Steelers. Absolutely electric atmosphere. The beauty of barns like this, is that the atmosphere can be electric. However, the Phoenix have struggled to pull in large numbers, although the atmosphere can still be generated even if half full.

As my most local rink (at least until the Widnes rink opened in 2013), it’s been my home of hockey and a place I enjoy visiting. Good location, good atmosphere and good facilities – just a shame about the sight lines!