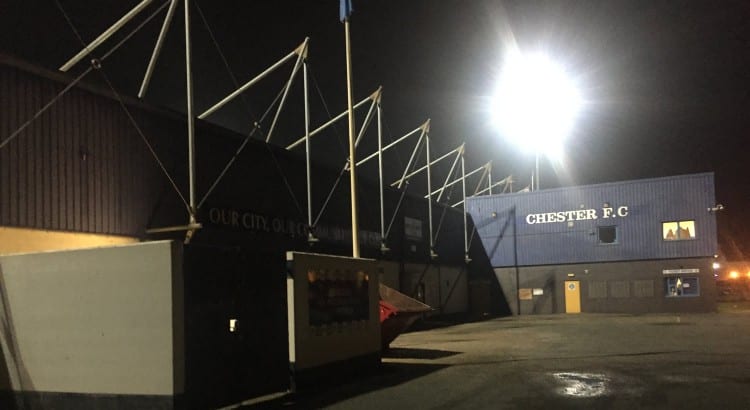 Chester’s is a ground that I have wanted to visit for several years and for whatever reason my planned trips have always been cancelled.

Built in 1992, it is a really tidy, compact looking ground. It is ideally situated at the foot of an industrial park, not far from a retail park which is actually housed on the site of Chester’s former ground.

There is plenty of parking and space around the ground, and unlike many new grounds doesn’t seem to be too far away from civilisation. There are many grounds where if you can’t get a car parking space on the stadium car park, then you’ve got a bit of a walk to get to.

It was a shame that my first visit to Chester, and the so called Lookers Vauxhall Stadium, was only for a Cheshire Senior Cup tie, meaning there was only a crowd of 400 or so, because my impression is that Chester are a passionately supported club.

They reformed in 2010 and have climbed up the leagues to return to the National League.

The stadium has a main grandstand and then two all-seater stands and one terraced stand behind the goal, all of which are covered.

The set-up of the grandstand and the inside is certainly geared up for a Football League club and despite the relatively small occasion, the hospitality was superb.

There is of course the story about how half the ground is in England and half is in Wales – I’m told that the grandstand is now classed as in England, and the other three stands and the pitch is in Wales, but I stand to be corrected.

While I am a fan of new stadiums, there are many that criticise new grounds as being soulless due to their make up. However, my impression of Chester’s ground is that it still carries character despite it being relatively modern, certainly in comparison to rivals such as Wrexham.

It is well signposted around the city too, and fairly straight forward to find from the motorway.

In short, I had been looking forward to seeing Chester’s ground for a long time and I wasn’t disappointed.

I hope I get the opportunity to go back to watch a Chester home league game some time soon.