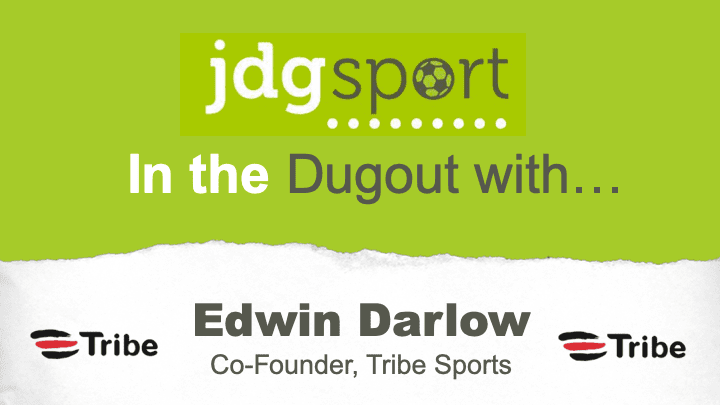 Today’s guest is Edwin Darlow, CEO and Co-Founder of New Zealand-based sports commentary app, Tribe Sports. In an already-crowded sports app market, Tribe have quickly found their niche and are rapidly moving from strength to strength, with the help of a team of commentators from across the globe. We spoke to Edwin about how they differentiate themselves and his vision for the app going forward.

If you want to be featured, drop us an email at hello@jdgsport.com.

My main early memories are of playing football and cricket in the back yard and at the local park with my brother and friends. In terms of pro sport, it would be going to watch Canterbury and New Zealand cricket matches with my Dad (in Christchurch, New Zealand – where I grew up). Chris Harris was a big favourite. Stephen Fleming, Chris Cairns, Martin Crowe. All those legends. And one fond / hilarious memory of big Aussie Merv Hughes dropping a skied one cold on the boundary in front of the main stand.

How did the idea of developing an app like Tribe come about?

My background is in Venture Capital and early stage startups. Very often good businesses start from simply trying to solve your own problem, which is exactly where Tribe came from. I probably had 20+ sports apps on my phone, and it just seemed like you should be able to have a single app, that’s a pleasure to use and covers your entire sporting world in one place, which is exactly where we are heading (noting that there isn’t even a BBC type equivalent in New Zealand either, so it was even more relevant there, but also applicable the world over).

What would you say is the thing that makes Tribe stand out from other apps or websites in the industry?

For starters, we’re not using the typical ad-funded media model. We don’t have any banner or pop-up ads, which baffles a lot of people (“how is this free?”). Banner / pop-up ads are such to the detriment of the user experience. It’s not that you won’t ever see a brand in Tribe, but the test for us is that anything you do see must truly enhance the experience – and even then if you don’t like it, you can choose not to display it. I think by using that starting point as a philosophy simply leads us to create a very different user experience compared to one that’s supported by ads. It’s 100% about the fan and how we can be valuable to them as a user. Most of the content we deliver is not wildly different to other apps – but the way we package it and the experience we deliver is generally what leads to the “best app ever” type reviews that we see almost every day.

What is the most effective tool that you as a business use to engage with potential new audiences?

This might sound a bit backwards, but it’s really the experience and the user. The most effective way we grow is by making the user experience so enjoyable and useful that our current users willingly and voluntarily share it with their friends. This might be adding local sports that are otherwise so hard to follow (something we’ve been experimenting with in New Zealand recently – spreading to the UK soon), which might lead to an explosion of downloads in a local school or local community. Out of everything we’re done and tried, nothing has been quite as effective as making the experience so good and useful that users will voluntarily tell others about Tribe themselves.

When you aren’t working, what sports do you enjoy playing and watching?

The great thing for me is that work and play very much overlap. It’s the ultimate ‘choose a job you love and you won’t have to work a day in your life scenario’. I am a massive tennis fan though, which we don’t yet have on Tribe (coming soon). I think I mainly enjoy the psychological battle of tennis. When watching, you can often almost see a player’s mind ticking over during the course of a set, a game or even a point. The mental strength from some; the absolute meltdowns from others. You’re so alone out there that you can’t rely on anyone else to dig you out of a tough spot. Tennis and football would be my key ones for both playing and watching (and rugby isn’t bad to watch as a Kiwi either!).

As a business, you have utilised quite a lot of young, hungry student journalists from the UK especially. How successful has that been?

Aside from the flexibility in their schedules, one of the great things about having students as commentators is that they’re generally hungry to learn and improve. No-one is ever perfect, but there’s an enormous difference between someone who is looking to be better with each game vs someone who isn’t, which is the typical scenario for many students who are looking to break into the industry. We have commentators from all sorts of backgrounds (and countries) and many of our best ones have been / are students who have needed little more than someone to take a chance on them. Most people find their first match fairly tough – but if we give feedback and their next match has noticeable improvements, then we know they’re likely to work out. For us, recruiting new commentators via Universities has by far the highest hit-rate of those who do a trial game vs those who end up becoming commentators. So for us it’s been great – and something we’ll be sure to continue with.

If someone wanted to get involved with commentating for your app, what kind of traits would you look for?

At the end of the day, all that really matters is what the output is for users to see. People are often using Tribe as their only source of knowing what’s happening in a match, so a commentator’s ability to not only deliver the facts, but also paint a picture is key. Obviously being able to type quickly and have a good sporting knowledge is critical, and then things like being able to think quickly about what you’ve seen and pull out the key elements is crucial too. It can be tough. You really need to have a keen eye for detail, but then also have the creativity to quickly and efficiently get down on ‘paper’ your thoughts that convey what you just saw to someone who hasn’t seen it. So it’s not really one thing, more a combination of bringing a variety skills together and then consistently delivering at a fast pace under pressure. For some people that might sound like a nightmare; for others it’s one of the most exciting jobs in the world.

What is the most difficult part of your role at Tribe Sports?

There’s an endless list of things we could do and want to do: new sports, different leagues, different regions, new features etc. We’re never short of things to do – which is a nice problem to have, and far better than being stuck for ideas – but the challenge is about prioritisation. The most difficult thing for us is probably accurately picking the highest value thing that we could focus on next. That’s a constant and on-going challenge, and not always obvious in the moment.

How important is it for sports fans to have a go-to source of information for sports when they are on the move?

Sport is a huge part of many people’s lives. For those users, following their favourite teams and leagues can mean a great deal to them. We get so many messages along the lines of “this is the best/most used app on my phone” simply because people are so passionate about following their teams. So our goal is really to be a single source of truth that people can rely on to deliver the information they’re after, whenever and wherever they might be.

Our goal is to be the single destination for sport for as many people as possible. What exactly that means and looks like is constantly evolving, but whatever direction it goes, it would be nice to think that in 5+ years time, we would be delivering that for millions of users, up from the current 10s of thousands we do it for now.