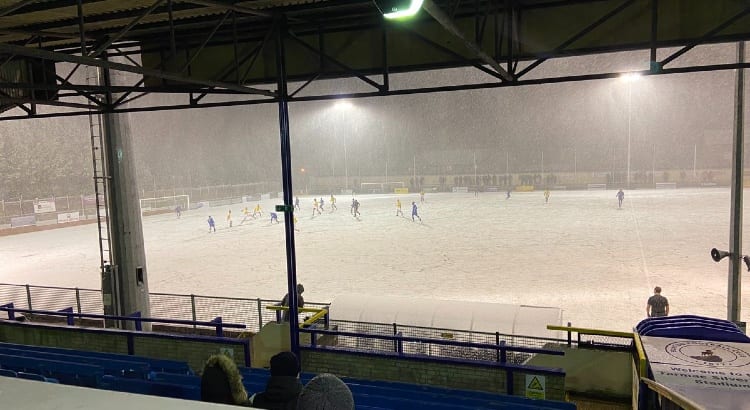 Looking back, a snowy Tuesday night in February proved to be a signal that 2020 wasn’t going to be a normal year.

An abandoned game between Buxton and Warrington Town, with the visitors leading 1-0, left me faced with a trip back over the Peaks.

I shouldn’t have been at the game – it’s late re-arrangement meant it clashed with a planned trip to Milan to watch Inter’s Europa League knock-out tie against Bulgarian side Ludogorets at the San Siro.
That was cancelled by the coronavirus outbreak, which had gripped Italy that time, but hadn’t yet had the catastrophic impact on life in the UK.

In something of a quirk of fate, that wasn’t the only game between Buxton and Warrington Town that I saw abandoned in 2020 – when the two sides met at Cantilever Park in October, the game was abandoned in the second half due to a serious injury to Yellows midfielder Scott Brown, who had to lie flat out in the centre circle for almost two hours before an ambulance came to his aid.

Like everyone else, there were no clues of the chaos that would follow back in January, where I attended Michael Shenton’s testimonial game between Castleford and Toronto Wolfpack, with Love Rugby League a proud sponsor on the shirt.

Our new-look show (or vodcast, perhaps?) on Love Rugby League saw us create a new studio space in the office and welcome a guest each week, which sadly only lasted a few weeks before lockdown hit. Some great shows were to be had with current player Matty Smith, former referee Ian Smith, ex-player turned actor Keith Mason, Rochdale chairman Andy Mazey and journalist Gary Carter.

First @loverugbyleague show of the season done, thanks to Matty Smith for being the first guest on 👍 pic.twitter.com/CfeVIOzTR2

The rugby league season started in earnest at the end of January, and I saw a big travelling support follow Widnes to beat Oldham on the opening day of the Championship season, while there was a big occasion in Super League as Warrington beat champions St Helens in front of a big crowd.

Speaking of Widnes, I was soon persuaded to become the commentator for the Widnes TV coverage, which sees all games in full become available for fans to watch in the days after the game. That started with a home game against London (a disappointing defeat), and it was an enjoyable run of games that saw me share the commentary box with a different player each week, including Kenny Baker, Deon Cross and Jay Chapelhow.

The last game Widnes played was on March 15 against Swinton. By now, coronavirus protocols seemed to be creeping in, with bag checks and even restrictions on having a co-commentator, meant I was to do the commentary alone. Rugby league was suspended days later and it hasn’t returned at that level since.

Successfully made it through the security bag checks at Halton Stadium where they are not allowed to touch the bag or any contents, to get to my seat for today's coronavirus-defying Challenge Cup tie between Widnes and Swinton. Here's hoping it's not the last match for a while. pic.twitter.com/ApXisnZ3o2

And that proved to be my last game until the middle of August, when non-league football teams were permitted to play pre-season friendlies.

My next professional rugby league game would be at the start of September, as Hull KR took on Wigan as part of a double header with Salford and Castleford at Headingley. That was an eerie experience, covering a game in an empty ground on a makeshift press bench in what we thought then was the “new normal”.

As it’s transpired, normality isn’t even close. I was fortunate that September and October at least provided some normality, in terms of being able to cover football and rugby league games, but as the Super League season came to an end, non-league football was brought to a halt, and I write this having been to just one game in more than two months.

It’s undoubtedly tough for everyone at the moment. You become insecure about your work and your income, but also about your purpose for being and your ambitions. It’s hard to aim for something when you’re not entirely sure what state the world is going to be in when it’s over.

The year ended with the departure of two staff from JDG Media, but we enter 2021 with an open mind.