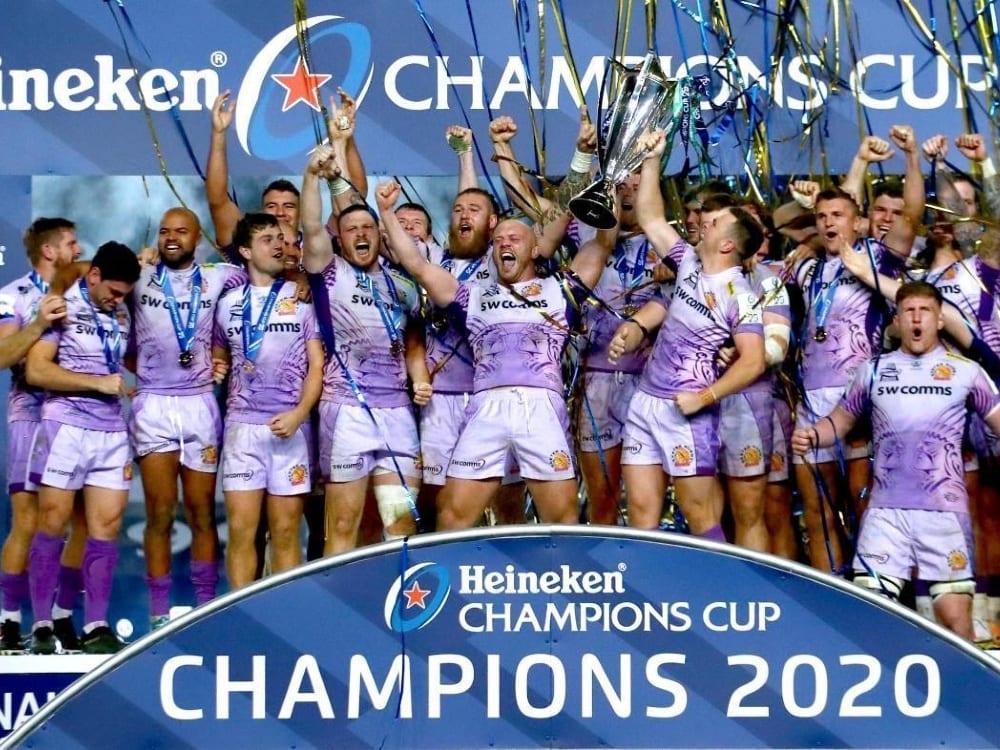 Exeter Chiefs were the well-deserved winners of the European Champions Cup in 2020 as they delivered a superb performance throughout the season and dominated both the domestic and European Rugby becoming the ultimate number 1 team this year. The final of the European Champions Cup in 2020 was like much of the year without fans, but this didn’t stop Exeter Chiefs and Racing92 delivered a superb final which swung one way then the other and saw plenty of tries and top rugby as Exeter Chiefs just came out on top winning 31 points to 27.

Looking ahead to this season and as all the teams begin their campaign participating in the pool matches with the aim of finishing in first or second spot to qualify for the later stages, BetOnline has all the latest odds for this season’s European Champions Cup.

The favourites for the European Champions Cup are Leinster who are set to be rejuvenated after they didn’t deliver to their true potential last year. Leinster are 5/2 (3.5) to win the tournament this year and are likely to comfortably qualify for the later stages and come 2021, they will be ready to win the title again.

Exeter Chiefs are next in the betting and are best priced 10/3 (4.33) to retain the Europeans Champions Cup and with the confidence of winning the domestic and European double last season, they will be super confident to aim to win back to back Tournaments when the finals are here in 2021. Exeter Chiefs have a great squad and united team which has so many assets from great backs to a very strong front row which gives them a huge edge. Now they have the experience in winning big titles, when it comes to the later stages of matches, they have shown their ruthlessness and killer instinct which can lead them to another big campaign this season.

One other team to mention is improving year on year is Racing92. They gave a superb account of themselves this season in 2020 playing some outstanding rugby and with many skilful players in their squad, they have extra motivation to win this season after going to close this year.

One of the best oddsmakers, BetOnline has all the odds on the European Champions Cup Rugby and Racing 92 can be backed for victory this season at 5/1 (6.0). Their pool group shouldn’t be too much of a problem for Racing92 and expectation is that they will go very close this season.

The one other team to mention at the top of the betting for this season’s European Champions Cup Rugby is Toulouse. This French outfit will once again be very strong and with some top talent in their squad will take all the beating when it comes down to the knock-out stages. This season Toulouse were knocked out in the semi-finals by eventual winners Exeter Chiefs, so like Racing92, both these French sides will be out for revenge. Toulouse odds to win the European Champions Cup are 5/1 (6.0) so looking at the top four teams at the top of the betting, there isn’t a lot between them and it is not unthinkable that Leinster, Exeter Chiefs, Racing92 and Toulouse could all feature in the semifinals, which would give us two brilliant matches.

As the ‘pool’ group stages begin the aim for all the top sides is to finish top of the group as this will give a home draw in the quarter finals, so this is number one priority. It is tough for a runner’s cup to go deep in the competition as they will have to play on the road to navigate their way through to the final.

Leinster look worthy favourites to win the tournament given the pool they are in doesn’t look as tough as the one with Exeter Chiefs and Racing 92, so at odds of 5/2 (3.5) it is worth siding with the Irish outfit to win the European Champions Cup. They have the experience and quality in their squad to do so and having won the tournament in the past, they know how to get over the line in a major final.