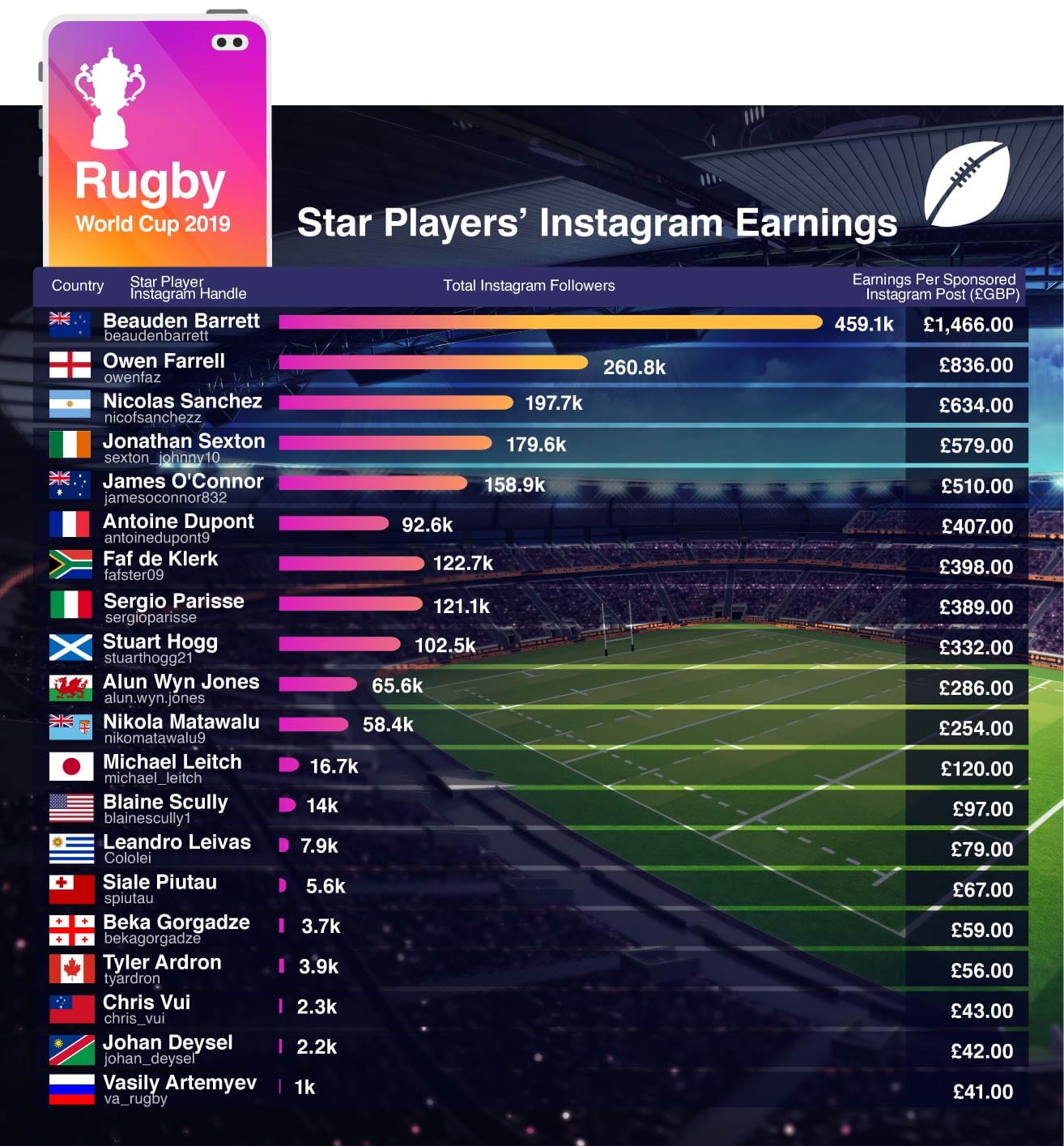 The Rugby World in Japan kicks off on 20th September, and it promises to be an exhilarating tournament. The competition will undoubtedly have some of the biggest names in the sport on show, as they all look to inspire and drive their respective country to glory.

With all eyes on the players, it provides companies the perfect opportunity to capitalise on the attention by offering star names sponsorship options to boost brand reputation and awareness.

Interested in rugby’s biggest influencers, rugby tickets company LiveRugbyTickets.co.uk utilised data from ‘Influencer Marketing Hub’, to discover how much the star player from each of the 20 nations in the Rugby World cup earns on average from a single sponsored post on their official Instagram profile. 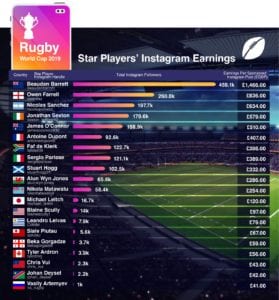 Live Rugby Tickets found that New Zealand’s Beauden Barrett is the star player who makes the most from Instagram. The out-half maverick currently has 459.1k followers and earns an astonishing average of £1,466.00 per post.

Thereafter, is England’s dynamic Owen Farrell. The fly-half has 260.8k followers and on average accumulates a hefty £836.00 per post.

In third position is Argentina’s record points scorer Nicolás Sánchez, who has 197.7k followers and on average benefits from £634.00 per post.

Just below, Ireland’s Jonathan Sexton with a following of 179.6k, can enjoy a financial sum of £579.00 per sponsored post upload on Instagram.

Italy’s most-capped player Sergio Parisse is in eighth spot. The flanker has 121.1k followers on Instagram and on average, banks a sizeable £389.00 per sponsored post.

Whilst, Alun Wyn Jones who captained and inspired Wales to Six Nations glory earlier this year, is in tenth position with 65.6k followers and has an earning prowess of £286.00 per sponsored post.

On the other end, is Russia’s Vasily Artemyev. The winger who has 1k followers, earns a mere £41.00 per post. Similarly, Namibia’s Johan Deysel with a following of 2.2k, has an earning power of £42.00 per post.

Notes to editors: Please note, if you use any of this press release and/or infographic, please credit: https://www.liverugbytickets.co.uk/

*Estimated earning per sponsored post on Instagram collected from ‘Influencer Marketing Hub’ on Tuesday 17th September 2019. Figures on the tool are subject to slightly fluctuate (but not significantly), as estimates are based on each of the considered rugby players 12 most recent posts on their official Instagram profile.